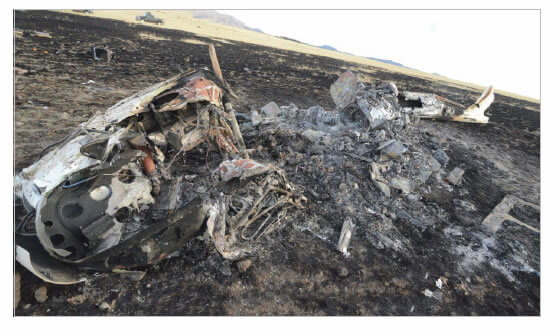 It’s dark—very dark. The trip is a short hop with passengers through mountainous country sliced by narrow valleys. You’re not familiar with the destination, but you’re very familiar with the 50-year-old helicopter and have the benefit of military flight training leading to a decades-long career of low-altitude law enforcement and search-and-rescue (SAR) missions.

Three new electronic flight displays were installed in the aircraft’s instrument panel barely three months ago. The weather conditions don’t pose undue problems. Given all these circumstances, you should be prepared to determine whether it’s safer to fly high or stay low, right?

Ten minutes before 6:00 pm local time on Jan. 17, 2018, a Vietnam-era Bell UH-1H Huey lifted off from New Mexico’s Raton Municipal Airport (KRTN), carrying five passengers to a private gathering on a ranch about 35 miles east, near the town of Folsom. Civil evening twilight had ended 15 minutes earlier and the night was dark, with a setting crescent moon providing “0%” illumination, according to the US Naval Observatory. However, skies were clear. Visibility was officially reported as 10 miles but essentially unlimited.

Roughly 10 minutes after takeoff, the helicopter’s skids ran onto the top of a mesa barely 100 feet higher than the surrounding desert. The Huey slid across the mesa for 110 yards before one main rotor blade hit the ground, leaving a 25-foot scar. The entire main rotor assembly separated and came to rest 20 yards farther along, close to the tail rotor and its gearbox. The cabin tumbled another 66 feet before rolling to a stop upside down and catching fire.

The one passenger who survived was hospitalized with a broken shoulder and broken arm. She told investigators that “the stars were very bright” and that there was no turbulence during the flight.

The investigators reported that the surviving passenger recalled “no unusual noises, no observed warning lights” and that “everything appeared normal.… [They] were in level flight when she heard a big bang as the helicopter hit the ground.”

When the aircraft came to a stop, the passenger was left hanging upside down from her seat belt with jet fuel pouring over her but was able to release her belt and escape the wreckage as the helicopter caught fire. Several explosions followed, and the passenger managed to call 911 to report the crash.

Temperatures were near freezing (1ºC at departure from Raton). The other four passengers, including a 3,140-hour commercial helicopter pilot with 120 hours of UH-1H experience, died before the first responders reached the scene two hours later. The pilot survived long enough to be rescued but succumbed during transport. He told one first responder that “it was all his fault and he flew into terrain.”

The view toward Raton Municipal Airport (KRTN) from the initial impact site. Photo by NTSB Photo

A Bell UH-1H, serial number 67-17658, the helicopter was built in 1967 and served the US government for nearly 30 years before being released by the General Services Administration in May 1996. Seven different civilian operators bought, flew, and sold the aircraft before it was acquired by its final owners in February 2017. During that time, the model’s type certificate (TC) was acquired by Rotorcraft Development Corp., which added the accident helicopter to its TC in August 2007.

The UH-1H has two-bladed main and tail rotors powered by a single Lycoming (now Honeywell) T53 two-spool turboshaft engine. The variant in the accident helicopter is rated for a maximum continuous output of 1,300 shaft horsepower, and the aircraft’s maximum gross weight was 9,500 lbs.

National Transportation Safety Board (NTSB) docket-­file maintenance records indicate that on Oct. 4, 2017—barely three months before the accident—the helicopter had been fitted with dual-screen Garmin G500H primary flight–multifunction displays, a Garmin GTN 750H GPS/Nav/Comm multifunction touchscreen display, and a radar altimeter equipped with fore and aft antennas. The pilot’s familiarity with this equipment has not been reported.

At the time of the accident, the aircraft was registered in the restricted category for external-load work. Under FAR 91.313, flight on restricted-category civil aircraft is limited to “the special purpose for which it is certificated,” and personnel on board are limited to crew members, trainees, and those others “required to accomplish that special purpose.” An exclusion for Part 133 external-load rotorcraft operations specifically states “nonpassenger-carrying.”

The 57-year-old commercial pilot was too young to have flown combat missions in Vietnam, but he’d learned to fly Hueys in the US Army. According to an insurance application filed 10 days before the accident, he completed initial pilot training in the army in 1983–84 and flew both the UH-1H and the Sikorsky UH-60A Black Hawk during his enlistment. He attended college after his discharge and went on to a nearly 20-year career flying SAR and law enforcement missions for the California Highway Patrol.

After a five-year absence from professional flying, he returned in April 2015 as a contract pilot and signed on with the accident operator as a full-time employee on Sep. 1, 2017. Both the insurance application and a medical application filed a month earlier claimed 2,065 hours of experience in UH-1 helicopters. Almost all his lifetime flight experience was in turbine helicopters.

The 67-year-old occupant of the left front seat was a commercial pilot who also had learned to fly in the US Army’s flight training program—in 1970–71. He’d served as a Bell AH-1 Cobra gunship pilot in Vietnam, earning the Purple Heart for wounds received in combat. He was also employed by the helicopter’s operator, though not primarily as a pilot; his insurance application, submitted on Feb. 7, 2017, listed 20 flight hours in the previous 12 months with just 1.5 hours in the UH-1H (the rest were in the closely related Cobra).

This pilot had served in law enforcement for 32 years, retiring in February 2004 as chief of the Pasadena, Texas, Police Department, which he joined after leaving the army in 1971. In the interim, he’d served as a dispatcher, officer, and instructor pilot. About 2,600 of his 3,065 flight hours of rotorcraft experience were in piston helicopters. He was the surviving passenger’s father.

The elevation of KRTN is 6,349 feet mean sea level. The NTSB report describes the accident site as “a flat mesa about 10.7 nautical miles and 102º from KRTN at an elevation of about 6,932 feet,” or 100 feet higher than the surrounding desert. The report notes that the site was about 4 nautical miles south of the narrow, relatively flat valley in which US Highway 64/87 threads between mountains rising above 7,500 feet to peaks as high as 8,185 feet.

The pilot’s experience navigating that route is unknown, but a witness at the destination said “it was probably minimal,” as “the few times” he’d previously flown to the ranch had likely been from the Perry Stokes Airport (KTAD) in Trinidad, Colorado.

An enduring mystery of aviation safety is why capable and highly experienced pilots either fail to recognize hazards that seem obvious in retrospect or knowingly choose to ignore them. In November 2007, for example, two Civil Air Patrol commanders with more than 53,000 hours between them took off from North Las Vegas on a dark night and flew their Cessna T182 straight into the side of Potosi Mountain. Complacency arising from long-standing comfort in the aircraft and airspace may have come into play in their loss of situational awareness.

The puzzling circumstances of the Raton accident could lead to the conclusion that a pair of ex-military aviators succumbed to the temptation to relive past glories and perhaps impress their passengers with a nap-of-the-earth flight over the desert at night. Nothing disclosed by the NTSB’s investigation, however, suggests that either pilot was disposed toward that kind of recklessness, though they were flying a restricted-category ship outside its certification limits.

Is it possible they were trying to follow the highway through the valley but picked up the wrong road? The accident site was just north of a smaller thoroughfare, and the attempt to maintain ground contact in the dark might have accounted for the decision to fly so low.

Another part of the puzzle is why the newly installed avionics didn’t help to prevent the accident. However, we don’t know whether either pilot was familiar with the capabilities of the electronic displays, or even whether the displays were fully operational. Set up properly, the devices could have provided terrain maps and even a helicopter terrain awareness and warning system (HTAWS). We know the helicopter was equipped with the radar altimeter needed to provide HTAWS alerts down to 50 feet, but not whether all the required interconnectivities had been completed or whether either pilot knew how to invoke those functions. We also know that as you climb, the valleys get wider and the peaks farther apart.

Sadly, the low altitudes that helicopter pilots love—and that serve them so well in combat, law enforcement, and inspection work—are not always their friends.