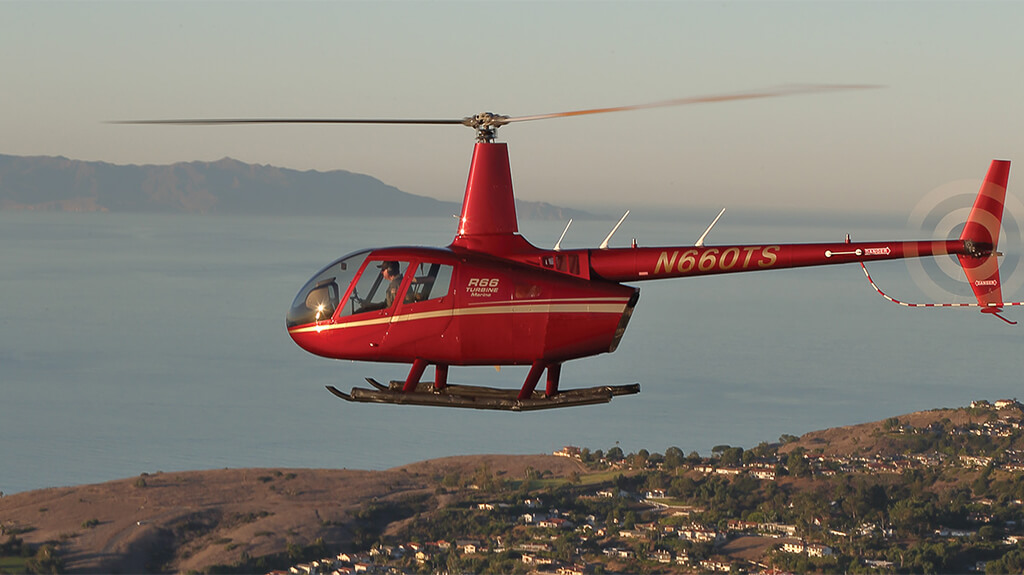 Cover Photo: It’s easy to talk about but hard to do. All photos by Dan Sweet/HAI

A company that produces only three models of helicopters, Robinson recently achieved a milestone by being recognized by Vertical magazines’s 2018 Helicopter and Engine Manufacturers Survey as having the highest customer service satisfaction ratings within the helicopter manufacturing industry.

Listening and responding to Robinson operators is one of the primary factors in the company’s high customer service marks. Its customer service team treats all owners and operators equally, regardless of whether they have one helicopter or a fleet.

“Sales is the just the beginning of a relationship,” offers Kurt Robinson, company president and chairman. “You put the trust in us to buy our helicopter, and so we will absolutely support it.” 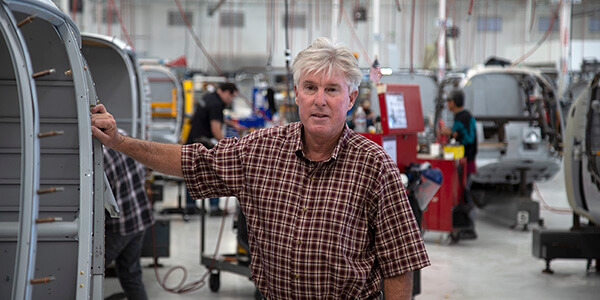 Now company president and chairman, Kurt Robinson ran the Robinson Helicopter customer service department at one point in his career.

After working for Bell Helicopter and Hughes Helicopters, Frank Robinson started his company in 1973 and rolled the first production helicopter—the R2—out of his plant in 1979.

Forty years later, Robinson has produced more than 12,000 helicopters, many sold to nontraditional customers like hobby flyers who have embraced the airframe and the company that produces it. Today, Robinson maintains a headquarters and manufacturing facility in the Los Angeles suburb of Torrance, California, employing approximately 1,100 men and women. Many of the employees are fiercely loyal, staying with the company for upwards of 30 years.
From the company’s earliest days, the comparatively affordable helicopters have appealed to a broad range of operators. Flight training operations around the world use the piston-powered, two-seat Robinson R22 to teach new pilots, and its price point has made it popular with ­budget-conscious enthusiasts.

“From the get-go, Frank would say ‘We’re a Henry Ford–type of company, and we’re going to try and keep the costs low,’” recalls Kurt, who assumed leadership of Robinson in 2010, after the retirement of his father, Frank. “If we can figure out a way to cut our costs, we want to pass that on to the consumer. I would much rather build a lot of parts at a lower price and have low margins. We want to keep our prices low and earn an honest profit.”

The four-seat, piston-powered R44 was released in 1990 and became the best-selling helicopter in the world with more than 6,000 produced. The turbine-powered R66 followed in 2010 and is widely utilized in commercial operations.

“I love hearing what people do with our aircraft,” says Kurt. “People tell me things all the time, and I think, ‘I never knew people were doing that.’”

From some of the earliest days of the company’s marketing, Robinson has promoted its aircraft as the product of quality engineering with an emphasis on pilot and passenger safety. “I see aircraft that we built in the 1980s that are still flying today,” Kurt says. “I’ve heard the jokes: ‘Do you really buy a Robinson, or do they just let you use it?’ Some of these helicopters have had three or four different owners.”

“We sell a time machine, when you really think about it,” says Pat Cox, Robinson technical representative. “Very few people buy a helicopter because it’s fun. People buy helicopters to save time. So if we can’t keep them in the air, we don’t deserve to be in business.” 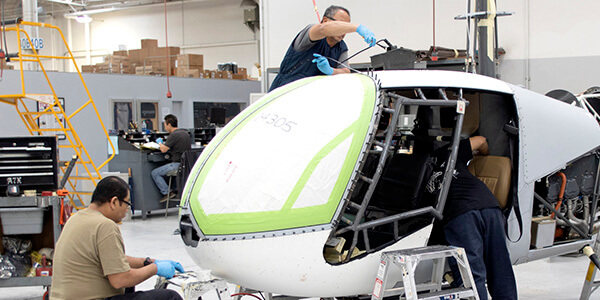 Employees in Robinson Helicopter’s production facility in Torrance, California, work on the final assembly of a new R44.

“I know Frank highly valued customer service,” says Kurt. “And many times, he was interested in it from an engineering standpoint. He wanted to understand what led to the problem. Once he understood, he’d go back to engineering and say, ‘This isn’t right. Pull out that drawing, let’s take another look at that part.’”

Like his father, Kurt recognizes the importance of customer service. “Every time we hire a new customer service representative, I personally sit down with them to explain how important customer service is to us. I want them to know that if they ever get to the point where they’re going to have to tell someone no, they need to run the situation past me or one of the more experienced representatives to see if we can come up with an alternative solution.”

Kurt takes pride in the detailed knowledge the customer service representatives have of the Robinson fleet. “Someone will call in with a problem [that] just vexes everybody, but we can look at the cause, not just the symptom, and get back to determining the solution. I know it always feels good when we can resolve something like that.”

“I’m here at the crack of dawn,” says LuCinda Montague, supervisor of customer service who has worked at Robinson for more than 30 years, “so my European customer can get ahold of me before they leave for the day. I have people in my department who take staggered lunches, so there’s always someone available should a customer call or show up in the lobby.”

“Our customer service and tech support areas are within a few feet of each other,” adds Nieto. “We are constantly at each other’s doors to meet the goals that have been established, not just by the Robinson family, but by the customers themselves. And we do our best to meet those goals as often as we can.” 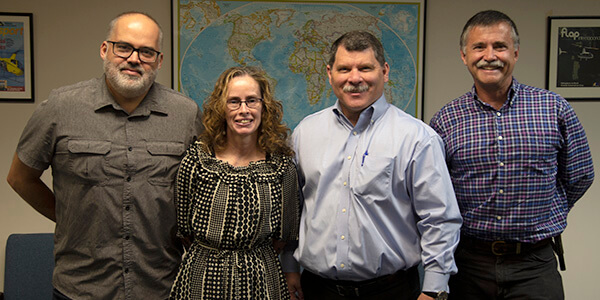 Speedy Service Across the Globe

“A lot of the time, the individual owner or the small operators don’t know the options that are available to them,” says Kurt. “They’ll call in, and one of our tech reps will offer, ‘Well, we don’t have that part in stock, but if you contact this other service center, I believe they have it.’”

Rotorcorp in Atlanta, Georgia, and Heliflite in Sydney, Australia, are both large parts suppliers for Robinson, offering parts either regionally or globally. “People can go directly to a service center or they can come through us,” adds Montague. “We encourage our service centers to hold things in stock so that customers can purchase them quickly.”

“We try to get customers to stay regional if they can,” says repair station manager John Hernandez, one of the youngsters in Robinson’s Customer Service Department with “just” 13 years at the company. “If an international customer is reaching out to us directly, there might be some lag time. If they’re able to go to within their country or region, they can get parts faster.

At the heart of the network is the understanding that all customers, whether they own one Robbie or 20, are equal. “It doesn’t matter if you’re a service center or a dealer, or if you’re a private pilot,” says Montague. “You absolutely get the same service.”

While every operator is on equal footing, there are occasions when one service issue will rise above others. “We really understand the true meaning of AOG [aircraft on ground],” says Kurt. “I spent many years running customer support and talking to the actual operators. I have at times literally gone down and stopped the main production line, just so that we can get a part out to our customer so that they can get back up and flying.”

Depending on circumstances, Robinson will also try to prioritize customer requirements. “I might have a customer who tells us, ‘Hey, I’m going to be flying in a month, and I’d like you to get this part to me.’ And I’ll have someone who is AOG or close to AOG, and I’ll try to work with both parties to get the part to the operator who needs it most,” says Kurt. “And we don’t forget the other person, because they need to go too.”

Response time is of vital importance to Robinson Helicopter Company. In a recent survey, 84 percent of respondents indicated Robinson handled their technical support issues within two days. The company accomplishes this goal through “old-fashioned” connections like phone calls and emails with the customer service representatives and through more modern systems where barcoded parts are ordered online with a credit card.

“This is an area we have developed and worked on for years, just to get parts out,” says Kurt. “I can call up and order something online and have it shipped to me the next day. So why can’t I do that with a helicopter part?
“I understand that there are bigger components, such as additional inspections to complete. Or if it’s going to foreign sales, there’s other paperwork and criteria that we need to meet,” he says. “But those are some of the areas where we just keep saying, ‘Why can’t we do it? What is preventing it, and how can we streamline the process to get it out?’

“One of the huge things that has made life a lot easier for everyone is the cell phone camera,” says Kurt. “It is so helpful now to get a picture quickly, rather than having someone try to describe a problem. It makes our response time a lot quicker.”

Robinson continues to upgrade its aircraft as industry technology has advanced, including features like GPS, SAS [stability augmentation system], and autopilot. “All of those relate to safety and improvements in the aircraft to make it easier to fly,” says Kurt. “Hopefully, they’ll make it more fun to fly too.

“One of the things we do is to reach back and make certain [the older models] stay current,” says Kurt. “It’s clear to me that aircraft are getting easier to fly, but are they getting safer? … Safety is always there at the forefront of our mind.

“We want the owners and operators to stay safe,” Kurt continues. “It may be a 1980s aircraft, but if they’re doing an overhaul, we want to make certain the aircraft is as safe as it can be and that it’s maintained properly.”
At its core, customer service comes down to supporting the customer, regardless of the issue. “As Frank used to say, ‘Keep ’em flying,’” finishes Nieto. “So we pull a lot of rabbits out of our hat. All of our departments work together. If there’s an issue or priority, it’s not unusual for me to reach out to Hernandez, tech support, or production, and we work together. We pull a lot of rabbits because people need rabbits pulled. We keep customers in the air.”

Feedback from satisfied customers does make its way to the production line. “I’ll get an email back saying, ‘Thank God you guys were able to get this out to me.’ And I’ll let the teams on the floor know that their efforts were appreciated. Because it’s a team effort,” says Nieto.

“One of the things I guess I’m most proud of is that people love this industry,” finishes Kurt. “I like to think people get started with Robinson because they can afford it, and then they get going and get involved in the industry. I know businesses that started as a one-person operation, and now I realize, ‘Oh my God, they’ve got 20 helicopters!’ I’ve had people who have gone on to other aircraft, and they’ve come back to Robinson.”