Roy Simmons: A Life in Helicopters

Roy Simmons’s aviation career spanned nearly 50 years and took him around the world. Roy was an influential figure in the growth of one of the world’s most successful heavy-lift operators, Columbia Helicopters.

With his humble beginnings in the small farming area of Parkrose, Oregon, Roy Simmons never dreamed that he would have a distinguished career in aviation.

A past chairman of Helicopter Association International (HAI) and past president of Columbia Helicopters, Simmons has received many accolades over the years, including HAI’s Distinguished Achievement Award in 1999. With more than 5,000 hours of total flight time between his military and civilian service, Simmons has held FAA commercial pilot, rotorcraft, single-engine land, instrument, and instructor ratings, in addition to type ratings in Boeing Vertol 107-II, Sikorsky S-61, and Sikorsky S-58 helicopters.

Simmons was born May 22, 1936, in Portland, Oregon. The country was still recovering from the Great Depression and times were tough. “My parents owned an acre of land, and I recall we always had a big garden,” says Simmons. “During World War II, my parents loaned out some of the land to local families to grow victory gardens. They saved a little money during the recovery and built a house.”

Sadly, Simmons’s father passed away when he was only 11. His mother worked hard to support her son, working as a bookkeeper for several companies before becoming a registered nurse.

During his senior year of high school, his mother lost her job. Because Simmons had enough credits to graduate, he took a job in a lead fishing-sinker factory, attending school in the mornings and working in the afternoon and on Saturdays.

Simmons attended Portland State College from 1954 to 1956, majoring in business and technology with a minor in accounting. “While attending college, I worked part-time during the summer months for Warren Northwest Paving Company, driving pickup trucks and trailers,” he says.

After college, Simmons’s attention turned to aviation. From 1957 to 1958, he attended naval flight school as a cadet in Pensacola, Florida, where he received fixed-wing and helicopter training. Simmons then served in the US Marine Corps from 1958 to 1963, leaving active duty with the rank of captain.

Simmons flew both helicopters and airplanes in various squadrons in the United States, overseas in Japan, and aboard carriers in the South Pacific. “My overseas tour of duty was spent in Okinawa,” Simmons says. “It was an interesting assignment, as I was assigned to a marine observation squadron, flying both helicopters (the HOK-1 [later designated as the OH-43D]) and fixed-wing (the Cessna OE-1 [later designated the O-1B]). We were the only marine aviation unit on the island supporting a marine division. Our mission was flying search and rescue with the helicopters and using the airplanes for flying aerial observers and forward air controllers.

“I also spent several months during my 15-month overseas tour of duty on an aircraft carrier. I attended Embarkation Officers School, where I learned how to load vehicles, supplies, and aircraft onto navy ships. I was in charge of several shipboard movements during my overseas assignment. In early 1960, I was reassigned to another marine observation squadron at Camp Pendleton, California, helping to train pilots for their upcoming tours of duty overseas.”

Simmons spent the last two years of his active duty at the Marine Corps Air Facility in Santa Ana, California, flying the Sikorsky HR2S-1 (later designated as the CH-347). “At the time, the HR2S was the largest helicopter in the free world,” says Simmons. “It had two Pratt & Whitney R-2800 radial engines and could carry about 32 troops or several jeeps internally. It had clamshell doors in the nose with a hydraulic ramp for loading vehicles. It was a great instrument helicopter and very stable to fly under instrument conditions.

“However, I was always up on my emergency procedures, as most every flight was an emergency in the making. I spent several nights in the Okefenokee swamps of Florida; made an emergency landing in the desert near Tucson, Arizona; and made a single-engine night GCA [ground-controlled approach] into Fort Ord, California, with 28 troops in the belly. After those incidents, I decided I had all the fun I could handle and asked for release from active duty in 1963.”

After leaving active duty, Simmons was a member of the US Marine Corps Reserve from 1963 to 1969, drilling in Seattle, Washington. After having attained the rank of major, he left the reserves when the demands of his civilian job became too pressing and included extensive travel time. 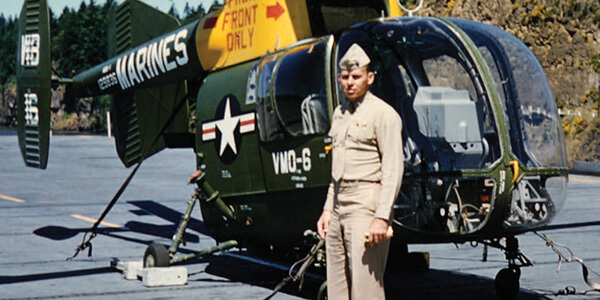 Roy got his start in aviation as a pilot for the US Marine Corps, flying the HOK-1 helicopter, among other aircraft. Photo by Roy Simmons Family Photo

While serving in the reserves, Simmons also worked for JN Conley, a medium-sized heavy-construction contracting company in Portland, Oregon. Simmons flew a Hughes 269A helicopter, working as a subcontractor administrator for the company while overseeing the weekly payroll of approximately 300 employees. He also managed most of the company’s insurance programs.

“I traveled with the owner of the company many times, which I considered to be an education in not only the construction industry but many aspects of business in general,” Simmons says. “I learned more from that man in four short years than I could have learned from college classrooms. He spent time explaining some of his shortfalls over a lifetime of being in business and taught me how to bid and estimate future jobs.”

In 1966, Wes Lematta, founder and owner of Columbia Helicopters Inc. (CHI), hired Simmons as a line pilot; the company was only nine years old and still quite small. Simmons’s career with Columbia spanned 33 years and was marked with numerous career advancements. He rose from line pilot to chief pilot, to operations manager, to director of flight operations, to vice president of flight operations, and then to executive vice president. Simmons became president of CHI in 1992, a position he held until 1999. He also served as a member of CHI’s board of directors.

Simmons’s efforts during Columbia’s first overseas work with the Boeing Vertol 107-II helped make a company specialty of onshore oil rig moves in some of the world’s most remote and inhospitable locations. His commitment to extensive employee training resulted in Columbia receiving six FAA Diamond-level awards for its maintenance training program.

“CHI pioneered many external load operations with their Boeing Vertol 107 and 234 helicopters,” says Simmons. “We also pioneered helicopter logging with both Sikorsky S-61 and S-64 helicopters. CHI was the first commercial helicopter company to recover US Navy torpedoes with the BV 107.”

Simmons has a long history of close involvement and service with HAI. Simmons has attended every HAI HELI-EXPO since 1972, until recent health concerns restricted his travels. He has been a member of the Twirly Birds since 1978, having soloed at Naval Air Station Ellyson Field in Pensacola, Florida, on September 8, 1958, in a Bell HTL‑6. Simmons was the 2014 recipient of the Twirly Birds’ Les Morris Award—a lifetime achievement award given to an individual who has made a significant contribution to the helicopter community.

Simmons also actively participated in the HAI Aerial Forestry and Government Contracting Committees, and he was the board liaison for the Legislative and Restricted Category Aircraft Committees. Simmons served on the HAI Board of Directors as assistant treasurer, treasurer, and vice chairman and became HAI chairman in 2004.

In early 1999, Simmons retired from Columbia after developing age-related macular degeneration. At his retirement, Wes Lematta, Columbia’s owner, said, “The success of this company is largely due to Roy.”

A family man, Simmons married JoAnna Rood on November 12, 1958. They have two children and two great-grandchildren.

Simmons is an avid supporter of the helicopter community and safe practices. “Safety was and always has been important to me,” says Simmons. “Safety remains paramount!”

He is also an active supporter of Helicopter Foundation International (HFI). In 2012, Roy and JoAnna Simmons graciously donated $50,000 to the HFI Scholarship Fund to help educate tomorrow’s pilot and maintenance professionals.

“I wanted to give back to the industry a small token—to assist the industry that has been so wonderful to me over many years,” says Simmons. “We old-timers need to encourage, in the best way we can, the young folks to get into our industry with a most rewarding career.”

“Because of Roy’s generosity, aspiring pilots and maintenance technicians have been able to complete their education and pursue their passion through HFI,” says Allison McKay, vice president of HFI.

In closing, Simmons has the following advice for tomorrow’s young pilots and mechanics: “Take your training seriously. Listen carefully to those with experience. There are many experienced pilots and mechanics out there who can do you a lot of good. Listen and learn, but don’t overextend yourself. And most of all, enjoy yourself — it will allow you a wonderful and fulfilling career.”

Martin J. “Marty” Pociask retired from Helicopter Foundation International (HFI) in 2018 after 17 years with the foundation and HAI. He most recently served as curator for HFI and was a former editor of ROTOR magazine. Marty is a talented artist who also teaches art.