In the SpotlightROTOR Magazine2021 June 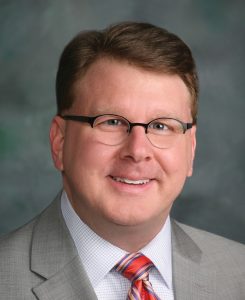 Ligado Networks, the rebranded LightSquared, asked the federal government for permission to repurpose its satellite spectrum licenses so they could be used for land-based mobile wireless broadband service. But users of the National Airspace System say Ligado’s plan threatens to interfere with critical services, including GPS and satellite communications, that depend upon interference-free operations in the spectrum adjacent to the Ligado network.

As Ryan Terry, director of regulatory licensing and policy for Lockheed Martin Corp., explains, this issue is a threat to aviation safety, particularly to low-altitude operations.

Why does Lockheed Martin care about radio-frequency spectrum?

Terry: First and foremost, Lockheed Martin is committed to the safe, continued use of GPS and related infrastructure. We manufactured the most recent generation of advanced GPS satellites, GPS Block III. So we care about issues that impact users’ access to GPS signals. That’s why the Ligado issue is specifically relevant—testing has shown it’s likely to interfere with that access.

Lockheed Martin is also a leading manufacturer of fixed-wing aircraft and, of interest to your readers, a premier manufacturer of a variety of medium- and heavy-duty performance rotorcraft. We also manufacture and sell a host of unmanned aircraft systems (UASs).

These aircraft all rely in some capacity on uninterrupted, predictable GPS signals for the safety of their operations, which routinely are conducted across some of the most challenging terrain and in fulfillment of critical missions. Predictable and uninterrupted GPS navigation is essential throughout all of these sectors.

What could be the impact if Ligado is allowed to proceed with its plans?

Ligado has said it will erect up to 20,000 cellular towers to build its network. Testing shows that cellular signals from those towers would interfere with aircraft operating FAA-certified GPS receivers. To mitigate this, the FCC is proposing a 250-ft. separation between Ligado towers and aircraft. But this isn’t a workable solution, especially for low-altitude operators using helicopters and UASs. [Editor’s note: see the graphic below for an example of how maintaining a 250-ft. distance from a Ligado tower isn’t realistic for aircraft conducting low-altitude operations.]

Low-Altitude Aviation at Risk from Ligado Networks Interference. Many helicopter missions are performed at low altitudes or require pilots to land without airport navigation aids. Proximity to Ligado Networks towers and handsets dramatically increases interference with GPS and some air-to-ground communications, a particular concern during takeoff and landing phases of flight.

One major concern we have is the potential impact of this interference on helicopter terrain awareness and warning systems (HTAWSs), which are critical to determining location, particularly in harsh weather or low-­visibility conditions. GPS interference in these low-altitude environments also affects pilot workload, ADS-B, and other aviation functions used by aircrews for safety while operating within 250 ft. of cell towers, which is often necessary in, for example, helicopter air ambulance operations.

Beyond safety concerns, are there other costs to harmful spectrum interference?

GPS and satellite communications make up an expansive array of technologies and platforms that daily benefit users across the United States and, indeed, contribute to the US economy as a whole. In fact, the Department of Transportation (DOT)—and multiple users and industries—has noted that the types of GPS uses that would experience interference from the Ligado network include emergency response, commercial trucking, general navigation, high-precision instruments for surveying, machine control, scientific applications, precision agriculture, and timing signals.

Many GPS receivers have integrated antennas, and fitting them with new antennas could be extremely expensive. And because many receivers are integrated directly into the platforms without the ability to be accessed for replacement, retrofitting them is virtually impossible.

Why should rotorcraft owners and operators care about spectrum policy?

The Ligado issue is one use case that demonstrates a broader issue: spectrum policy is sometimes generated in a vacuum, and there’s often not enough interagency coordination, particularly with the agencies and entities charged with public safety.

The FCC is an expert agency that deals primarily with communications—cellular towers and services, Internet access, wireline broadband equipment. As a result, the agency tends to treat all spectrum uses as just another communications tool. But issues like the interference caused by the Ligado network are actually about the compatibility between a communications network and a positioning, navigation, and timing (PNT) network, such as GPS.

The FCC doesn’t historically have this in-house expertise; this expertise lives at the Department of Defense, DOT, and the FAA, among others—which is fine. But the FCC shouldn’t treat spectrum use as solely a communications issue and not consult with other agencies, which is what happened in the Ligado Networks case. Fourteen other federal agencies went on record opposing this deal, but the FCC went ahead with it anyway.

What’s next on this issue? What’s next for spectrum policy generally?

On the Ligado issue, specifically, a bipartisan group of senators has introduced legislation that would address the costs to the private sector that would result from harmful interference with GPS and satellite communications. And the new FCC leadership will soon have the opportunity to address petitions to reconsider its decision.

Bottom line: spectrum is a resource that’s taken for granted—until you no longer have access to it or it no longer works as it should. This is a lesson as to what we can expect when spectrum policy and aviation safety aren’t aligned. And what we see here is that a well-informed spectrum management framework matters. Input from all the relevant stakeholders needs to be solicited and considered.