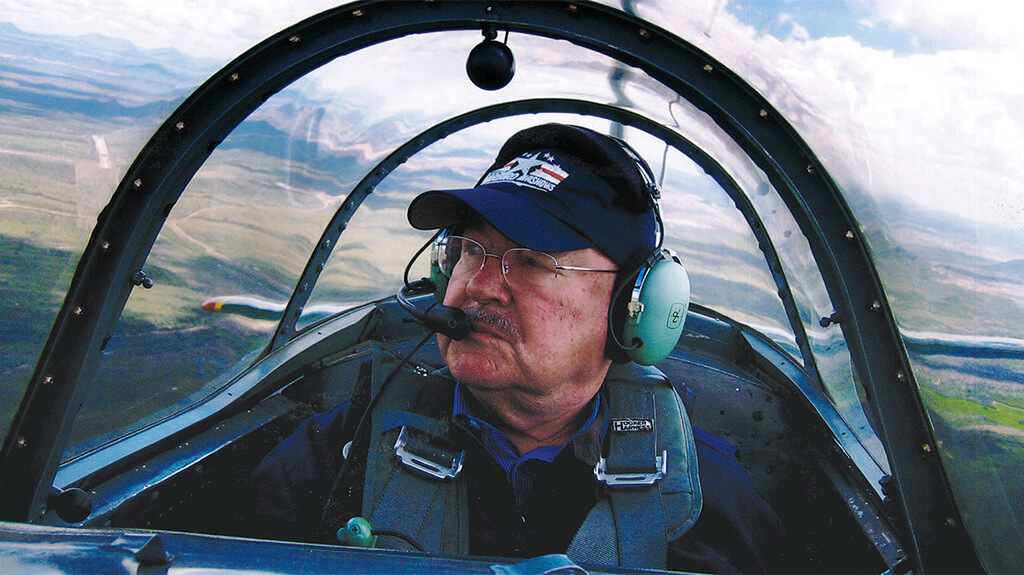 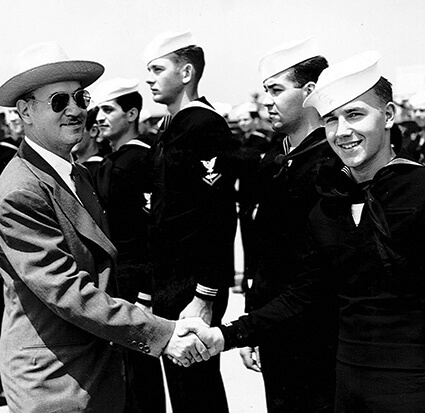 With a background in aviation going back to his birth, Sergei Sikorsky’s career traces the development of helicopters and the global aviation industry, despite his almost being sidetracked into medicine.

Sergei, now 94, discussed his life and career in an interview with Martin J. Pociask, retired curator of Helicopter Foundation International. You can watch the entire interview online at rotor.org/trailblazers.

Sergei is the son of aviation and helicopter pioneer Igor Sikorsky, who designed the first viable helicopter in 1939, the Vought-Sikorsky VS-300. A talented aeronautical engineer, the Russian-born Igor also designed the world’s first successful four-engine airplane in 1913. Before the 1917 Russian Revolution, Igor had a company Sergei says “would today be the equivalent of combining maybe Boeing and Douglas.”

With Europe recovering from four years of war and Russia in turmoil, Igor fled to the United States in 1919, living “in a $12-a-month flophouse in Manhattan” and supporting himself by lecturing on mathematics and physics. But by 1923 he managed to form an aircraft company bearing his name.

Sergei was born in 1925 and, in his words, “fell in love with aviation at a very early age.” He started building model planes around age six, and he recounts an early memory of the rollout of the legendary Pan Am clipper.

Sergei recalls flying in his father’s lap in the co-pilot seat of a Sikorsky S-38 Amphibian. Visits from some of the greats of early aviation were common in his childhood, including Charles Lindbergh (Sergei recalls playing with his children), Pan Am founder Juan Tripp, Pan Am’s first head of flight operations André Priester, aviation pioneer Roscoe Turner, World War I fighter ace Eddie Rickenbacker, and Jimmy Doolittle, the American aviator who led the development of instrument flight.

In 1909, recognizing the limitations of the technology at the time, Igor abandoned his research on helicopters, concentrating instead on fixed-wing aircraft. Fortunately, he later revisited his research in vertical flight.
Sergei recalls one afternoon in 1938 “when my father returned home from a critical meeting with the board of directors of United Aircraft and told us that his helicopter project had been approved.”

Visiting the United Aircraft factory in the late 1930s, Sergei became intrigued “by a small little helicopter that was taking shape in the corner of the seaplane hangar.” Sergei worked with Igor, including making small balsa helicopter models and sketches of future helicopters conducting various missions, for his father to show to engineers.

Sergei handled a number of jobs as the pioneering Sikorsky VS-300 came into service around 1940, including greasing the main rotor and tail rotor fittings. Bearings in main rotor hubs would shoot grease out, which did not bode well for the parade of visitors to the factory.

As Sergei remembers, “When we didn’t like somebody, we would always say, ‘You don’t have to go back too far. You could stand up pretty close—very moderate rotor downwash.’ And sometimes that person believed it, stood up fairly close when the helicopters took off, and got himself a grease bath. It was not very polite, but at that time we weren’t very polite.”

The Sikorskys warned those they liked to stand back at least 50 feet, he says.

Sergei stresses that his father was adamant about not being named the inventor of the helicopter.

“Whenever he was told that he was the father of the helicopter, my father would insist, ‘No, the father of the helicopter is Professor Henrich Focke who built the very first practical machine capable of flying 250 miles, capable of climbing to 11,000 and 12,000 feet of altitude and endurances of 2½ and 3½ hours.’” Igor, he says, “would grudgingly admit to the fact that he solved the challenge over the single main lifting rotor and a small anti-torque rotor, which he made with the VS-300.” 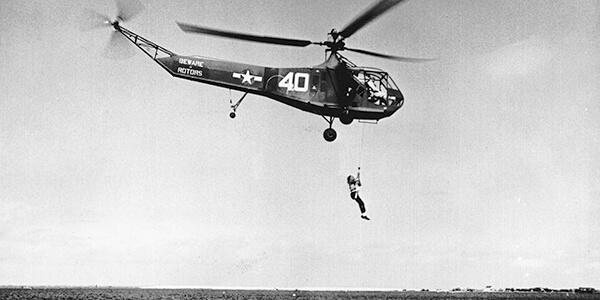 Sergei is extracted from a raft to a Sikorsky HNS-1 in one of the first demonstrations of the helicopter hoist rescue.

A Detour in Italy

Drafted in 1943, Sergei went into the Coast Guard Helicopter Development Unit, a joint US-British unit that trained the first US and British helicopter pilots and mechanics and developed the first helicopter rescue hoists, litters, baskets, and related piloting techniques. His unit was also involved in some early search-and­rescue missions. Such a rich background in the early development of helicopter operations gave Sergei a promising future in aviation.

But first, fate had a detour in store. Sergei wanted to go to college on the GI Bill after the war, but with colleges crowded with his fellow ex-US servicemen, the wait to matriculate was two or three years.
“Unexpectedly,” he says, “I received a letter from a squadron mate who was studying in Italy on the GI Bill. The schools were hungry for students paying in dollars; the $72 subsistence monthly was adequate to live reasonably well in postwar Italy.”

He decided to “kill one or two years” in Italy where he studied art, art history, and architecture, ending up in an anatomy class being taught by the local hospital’s chief surgeon.

“I darn near changed professions and … was seriously considering taking up surgery, becoming a surgeon in the academy and going through the training,” Sergei says. “I decided later on that it was not quite what I wanted to do.” He returned to the United States, having graduated from the University of Florence “with a smattering of German and French, and very fluent in Italian.”

“I have lots of wonderful memories of my time in Italy,” Sergei says, “such as flying surplus US Army Piper Cubs liberated by Italian flying clubs, the first generation of post-war Italian sport aircraft … the Macchi, the Fiat, and the Piaggio designs. And last, but not least, the beautiful Italian models in art class.” 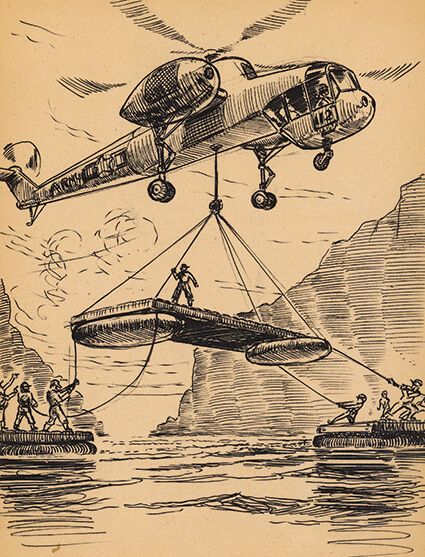 Sergei used his drawing skills to illustrate a variety of helicopter missions for his father’s engineers.

Aviation in a Postwar World

In 1952, Sergei returned to the United States and took a job with United Aircraft Export Corp., which sent him to post-war West Germany to support Pratt & Whitney/Hamilton Standard in Europe and establish links with the recovering German aviation and manufacturing industries. Because of the war, West Germany was barred from aviation at that time.

However, because of tensions with the Soviet Union, United Aircraft executives predicted—correctly, as it turns out—that West Germany would be allowed to join NATO and restart its aircraft industry. During this period, Sergei established links with Germans who went on to high positions in Lufthansa and the West German Defense Ministry.
His work also took him to Asia. With political issues threatening the new Mitsubishi license for the S-55/H-19 Chickasaw, he was reassigned to Japan, an assignment that grew to include Taiwan, Hong Kong, Macau, and the Philippines.

Sergei later returned to West Germany after France agreed to German rearmament and as Lufthansa was permitted to buy Convair 440 prop-driven airliners. Meanwhile, the West German army was creating an aviation branch, historic aircraft companies reemerged, and the country began to bring in US, French, and British aircraft.

“I was an office manager. My job was to monitor the well-being of a company of 21 H-34 helicopters being tested against an equal number of then Piasecki H-21 helicopters,” Sergei says. His reassignment to West Germany was lengthened “as the Sikorsky H-34 won against the H-21 and an additional 140 H-34s were procured.”
During his time in Germany, the West German government began funding a new type of helicopter, the Sikorsky S-64 Skycrane. “Not too many people know that the Skycrane program actually was funded by the German government and not by the US government,” Sergei says.

He eventually became involved in numerous marketing campaigns in Europe. “These included the NATO-wide heavy-lifter, which resulted in the S-64 Skycrane program, the German coproduction program of 112 CH-53 cargo helicopters to replace the H-34s, and smaller numbers of various CH-53 versions for Israel, Iran, and Austria,” Sergei says.

The world was changing, though, and in the late 1960s he began to visit the Soviet Union, where, he says, his father’s name opened a lot of doors.

“At the time, the Soviet Union began to show its aeronautical hardware at the Paris Air Show and Farnborough. I became in demand as an unofficial facilitator­translator,” Sergei says.
He recounts meeting the first man in space, Soviet cosmonaut Yuri Gagarin, who showed Sergei his space capsule and “gave me some of the scary stuff about reentry when he was looking at the window, and suddenly, whop, the outmost layer of glass just disappears in a flash and then the second layer disappears about 10 seconds later.

“And he was lucky the last three layers of glass held but were badly, badly heated in the process. He got down all right, but it was a very interesting interview on how you land a space capsule,” Sergei says.
He had no illusions about Russia, though.

“The day that I landed in Moscow, I knew that I was being followed. When I was in the hotel room, I knew that the phone was bugged and that probably there was a little camera somewhere photographing every single move that I made.”

After 24 years traveling “from Iceland to Iran, selling a few helicopters along the way,” Sergei returned to the United States in 1975, around the time the US Army announced that United Aircraft had won the Utility Tactical Transport Aircraft System contract for what would become the Sikorsky UH-60 Black Hawk helicopter.

Sergei recounts speculating with friends from the company at the time that they might get to build roughly 1,400 US Army Black Hawks and that the US Navy might pick the company for its next antisubmarine helicopter, with “a couple of hundred” orders from Europe and Asia. “So we were actually speculating that possibly, with a great deal of luck, we would build 1,800, maybe 2,000 Black Hawks,” he says.

Sergei says no one in that group could have predicted that more than 4,000 Black Hawks would have been built by now, operating in about 29 countries. He would not be surprised to see the company building the helicopter for at least another 25 years, for a total production of around 6,000.

“It’s a unique machine right now. And the interesting thing is that, of course, people are using the Black Hawk in missions that we—and certainly Dad—never expected or never thought about,” he says.

By then the vice president for special projects, Sergei retired in 1992 from United Technologies Corporation (UTC; United Aircraft changed its name in 1975), but he is still a consultant with the company. UTC is now owned by Lockheed Martin, but the Sikorsky name is still on cutting-edge aircraft (see the story on the Sikorsky Defiant on p. 30).

Sergei has many souvenirs and experiences from his lifetime in aviation. “Believe it or not, I have a membership card from the American Helicopter Society dating to 1945, the first year when it was organized,” Sergei says. He is also an honorary lifetime member of HAI. Sergei has held US, Italian, Swiss, German, and French pilot’s licenses and has checked out on around 40 US and European aircraft.

Frequently asked about the best way to become a helicopter pilot or mechanic, Sergei recommends starting with military service: “With a bit of luck, you can be trained in a light single-engine helicopter, progress through your instrument rating, and eventually wind up as a highly qualified multi-engine, instrument-rated helicopter pilot. As a mechanic, you will be trained to service and overhaul some of the biggest, heaviest, and meanest helicopters in the business.”

Given his military record, it is not surprising that Sergei has a favorite service to recommend. “At the risk of being called prejudiced,” he says, “I would suggest you take a good look at the aviation career, either as pilot or aircrewman/mechanic, potentially available in the US Coast Guard.… Choose the career path you like, and work like hell!”

A Washington-based journalist, Steve Hirsch has written for numerous news organizations in the United States and overseas. His previous work for ROTOR includes his Fall 2016 article, “UAS Cleared for US Aerial Applications.”