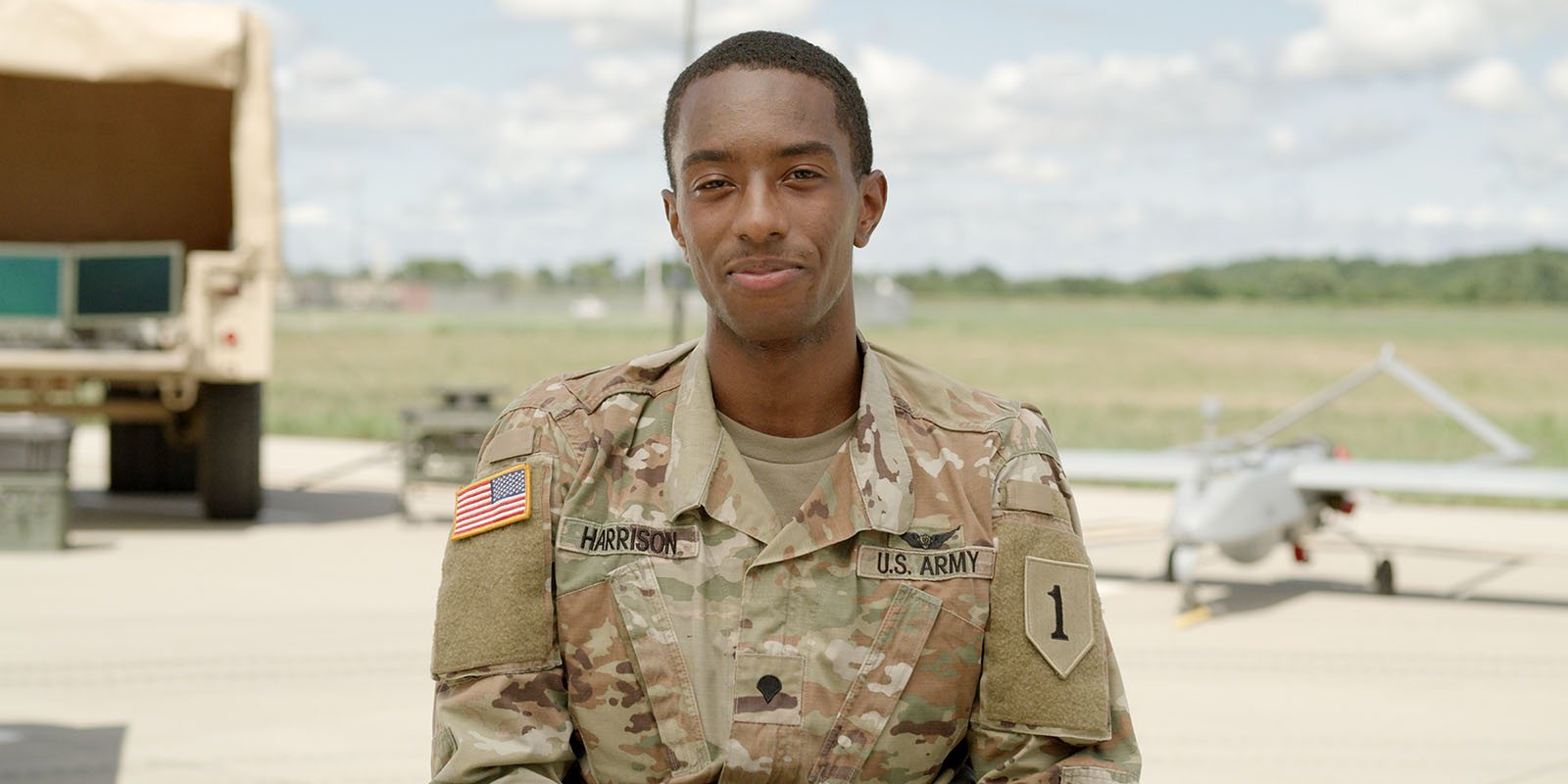 In the SpotlightROTOR Magazine2021 March

Soldier is “eye in the sky” for ground troops, pilots.

Military rotorcraft have long been a source of both personnel and new ideas for the civil industry. For many HAI members, their first helicopter ride took place while serving their countries. Military innovations later widely adopted by the civil industry include radar, night-vision goggles, and the helicopter air ambulance mission.

World War I saw the first military experiments with powered pilotless aircraft, and the US Army used reconnaissance drones in Vietnam in the 1960s. But it wasn’t until 2005 that the FAA released guidance on the civil use of unmanned aircraft systems (UASs, or drones) in the United States. Today, the agency has registered nearly 869,000 drones, compared with a 2019 estimate of nearly 211,000 general aviation aircraft. With the twin advantages of lower operating costs and less risk to human flight crews, drones are expected to be increasingly utilized by the civil rotorcraft industry. 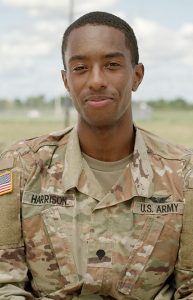 Sgt. Javaughn Harrison of the US Army 1st Infantry Division is the latest example of the military’s investment in drone applications. As an operator of unmanned aircraft systems (UAS), Harrison acts as “The Upper Hand,” identifying threats on the ground and in the air and then relaying that information to his fellow soldiers. He is also one of 12 soldiers starring in the US Army’s latest marketing campaign, “What’s Your Warrior?” which focuses on 12 in-demand military careers.

In late January, HAI President and CEO James A. Viola, himself a former US Army helicopter pilot, spoke with Harrison via Zoom from the soldier’s duty station in South Korea about the aerial advantage provided by UAS and how his unit works with manned aviation assets. [Note: this interview has been edited for length and clarity.]

Harrison: It went pretty smoothly. The payload operator, aircrew commander, and I went out to get the briefing from the Apache and Black Hawk pilots on what the mission would be and how we were going to execute it. They showed us maps of all the flight routes they were going to use, and our job was to build around that and help them navigate through it.

How do you prepare for a manned–unmanned mission?

We do different phases of training to attain top proficiency. Essentially, we practice so that when we get to the actual live flights and the MUM-T [manned and unmanned teaming] training, we’re not making fools of ourselves.

What’s a normal launch-and-recovery cycle for your UAS?

If we’re far away from the supported unit, we try to launch at least an hour before they do, so that we can get established in our respective locations. But if we’re close by, we try to launch first so that we can get at least 1,000 ft. above them. That way, when the supported unit gets to their spot, we can adjust to a certain height and distance in front of them, so as not to be in their line of sight when they’re performing engagements. That protects everyone’s aircraft, helicopter and UAS. 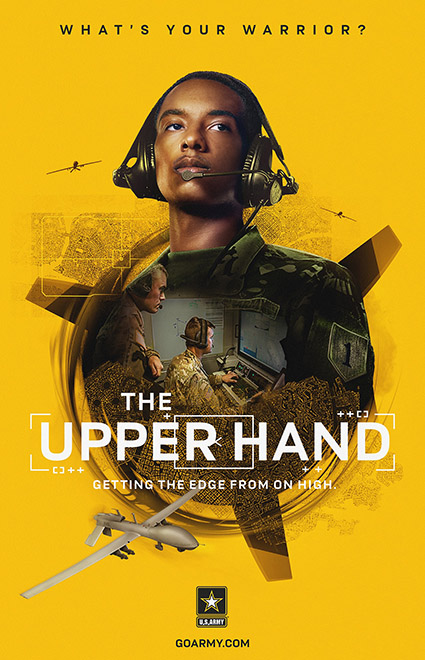 Harrison is 1 of 12 soldiers in the Army’s “What’s Your Warrior?” campaign about popular military careers. (US Army image)

Do you maintain a certain deconfliction altitude?

Do you do a post-flight on your vehicles?

Yes, once we land, we have our post-flight details to go through, including cleaning off the aircraft and filling out our flight logs. Once that’s done, we go over to the other pilots and have a post-flight conversation of how the flight went—the goods, the bads, the sustains—and take that information onto the next flight.

Do all the pilots understand the work you do and how you’re helping them, or are there some naysayers out there?

I’ll be completely honest with you, there are some naysayers. But, overall, the pilots seem hopeful about us. They want to be able to use us more than what we’re able to provide right now. They want to help us out, so it’s great; we want to help them out as well. So it’s a constant help-me, help-you type of thing.

We don’t get a lot of MUM-T training, at least for this unit. But when we do, we try to execute it as best we can and build off of the small things we’re able to control. It’s still a growing process, so we’re still taking baby steps to make sure it’s the best we can make it.

How long have you been flying?

I’ve been flying for about three years. I started in school in Arizona in 2018, and my first live flight was August of that year. I’ve been flying ever since I got to this unit. But by the time I got here, the unit was gearing up to go to Europe, so we had limited flight hours, and all our equipment was packed up, so I was doing most of my flying in simulators. But once I got to Europe, it was definitely a new experience—to go from flying at school to flying in a completely different country. I kind of submerged myself into a whole new world of UAS.

So you flew in Arizona, in Europe, and now you’re in Korea. Is there a big difference between the three? Do you have to learn different sets of rules for operations?

In Korea, [as of late January we were] still on COVID quarantine, so I haven’t been able to leave the base. But as far as Europe goes, we went from Germany to Poland, and those two were completely different. In our briefings, we were told about the different airspaces available, the different flight hours we could fly. Most of it tended to line up the same, aside from the airspaces we could fly and operate in.

Working with the local authorities was new and challenging, but in both countries, they worked really well with UAS. I guess the only thing I’d say is much different from flying in the States is for our UAS guys—our Shadow guys.

How big is a Shadow?

So not like the comparatively small UAS people in the States tend to think of. The Shadow is a small airplane, essentially. 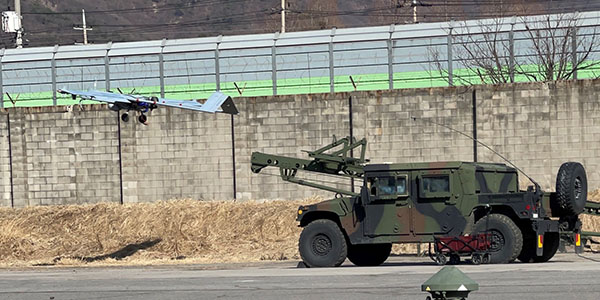 A team from the Army’s 1st Infantry Division launches the Shadow, the unit’s unmanned aircraft. The drone appears almost airplane-like, given that it weighs approximately 450 lb. and has a wingspan of nearly 25 ft. (US Army photo)

It sounds as though you’re very happy in UAS aviation, like you feel you’ve found your career.

I’m very happy. I’m out here getting a great education from this, great experiences. I meet a lot of different people, and I’m just having a blast with it. I’m optimistic about the future.

What does the nickname “The Upper Hand” and the role it signifies mean to you?

It means I’m the eye in the sky. I’m helping ground troops and pilots detect any threats out there, or any of the items or targets we need to detect. That way, the guys on the ground and in the sky can feel secure. We’re making sure they get their mission accomplished. We’re basically a big security camera that looks after them, to reassure them they’re safe.

James A. Viola is HAI’s president and CEO. After a career as a US Army aviator, he joined the FAA, where he served as director of the Office of General Aviation Safety Assurance before joining HAI. A dual-rated pilot, Jim holds ATP ratings in both airplanes and helicopters and is a CFII. Jim can be contacted at president@rotor.org.