Helicopter Association International (HAI) is pleased to announce that the 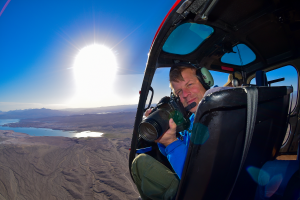 late Vertical magazine photographer and writer Lawrence “Skip” Robinson is the recipient of the 2023 Salute to Excellence Award for Communications. The award recognizes an individual for creative distinction in disseminating information about the helicopter industry. It will be presented to a family member of Robinson’s on Mar. 6, 2023, at HAI HELI-EXPO 2023 in Atlanta, Georgia.

Robinson, who died last year, was a world-class aviation photographer and fixture in the helicopter industry, where he was known for his fabulous photography, infectious passion for helicopters, and unique way of capturing jaw-dropping images.

Robinson loved helicopters from a very early age, studying the aircraft and their missions and amassing an impressive collection of helicopter memorabilia. Having photographed rotorcraft since his teens, he spent countless hours chasing after the aircraft with his lenses. In 2005, he submitted one of those photos, a Los Angeles (California) Fire Department Bell 412 working a fire, to Vertical. It was published, forming a partnership with the magazine that continued for the next 17 years.

With his first published image in hand, Robinson took his passion door-to-door. He had a particular interest in parapublic and military operations—not the easiest operators with which to secure permission to fly and photograph. Yet, his tenacity, credentials, and charm opened doors. Robinson shared his published Vertical photo with other public agencies and offered to shoot their aircraft for publication.

Vertical Editor Mike Reyno says the phone never stopped ringing after the day that first photo was published. In fact, Robinson often called several times a day with story tips and a willingness to go anywhere to create breathtaking images of helicopters. It wasn’t long before he was writing stories to accompany his photographs, taking readers on adventures and further capturing their imaginations.

“Everyone has a calling in life, and Skip’s calling was as a photojournalist in the helicopter industry,” Reyno says. “The stories that Skip would write and the photos he would take helped to inspire many to get involved in the helicopter industry. At HAI HELI-EXPO®, many people would tell us how Skip’s photos or stories inspired them to enter the industry. They all wanted to thank Skip.”

One photo shoot led to another as more and more agencies saw Robinson’s images and agreed to a magazine photo shoot of their own. Word was out about Robinson’s skills, and it wasn’t long before his customers went well beyond Vertical. Law enforcement agencies, air ambulance providers, flight schools, helicopter operators, and even manufacturers started calling Robinson to take photographs of their aircraft and operations.

When not spending time with or shooting helicopters, Robinson loved to share his passion with others. He was like an uncle to his neighbor’s children, even taking one of them on photo shoots that eventually inspired the child to to pursue flight training. Robinson was also an avid volunteer at the Classic Rotors museum in Ramona, California, helping the facility build its model collection.

From the local Los Angeles helicopter community to operators on the other side of the globe, people in the helicopter industry know about Robinson, either through their own contact or through his beautiful photography. With his words and through his camera lens, he brought readers with him on countless visits with operators in the field. His images have appeared in almost every issue of Vertical and Valor magazine and graced nearly 40 of the publications’ covers.

Robinson, 56, passed away unexpectedly in March 2022 of natural causes, leaving a hole in not only the hearts of his friends and family, but also throughout his beloved industry.

The Excellence in Communication award will be presented during HAI HELI-EXPO 2023. HAI HELI-EXPO®, the world’s largest helicopter trade show and exhibition, will be held at the Georgia World Congress Center in Atlanta, Georgia, March 6-9, with the exhibit hall open March 7-9. For more information on HAI HELI-EXPO 2023, visit heliexpo.com.