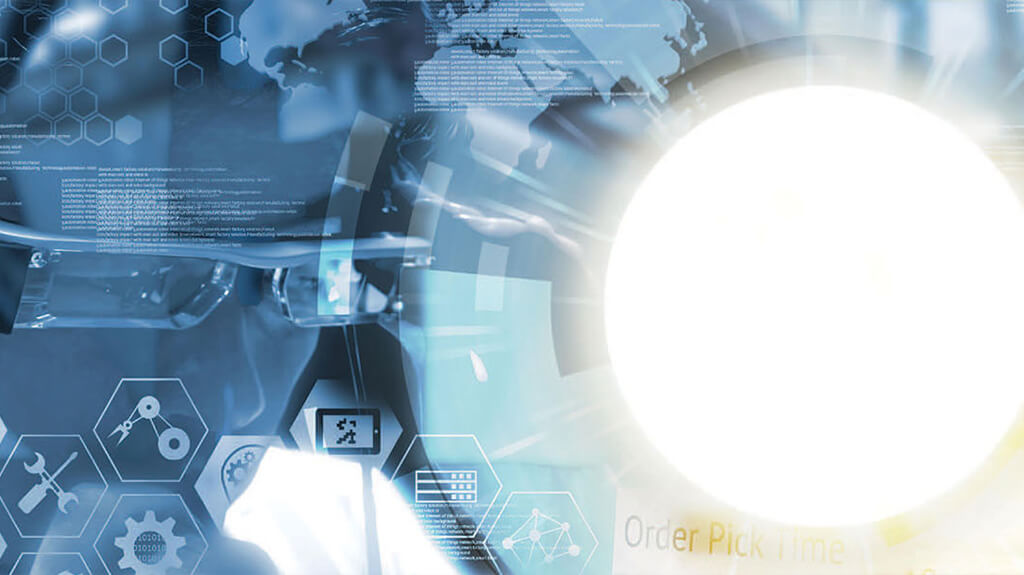 Vuzix M100 Smart Glasses are one of the most popular brands of smart glasses with aviation mechanics. Photo by Vuzix Photo

Among the technological fantasies offered by science fiction, Star Trek’s holodeck is one of the most intriguing. The holodeck offered the Enterprise crew the chance to interact with a realistic 3D environment. This could be any place, for any purpose — training for a mission on an alien planet or, as a break from shipboard life, spending an afternoon hiking on a forest trail.

The 24th century, inhabited in fiction by Captain Picard and his crew, has arrived early. Science fiction is quickly becoming science fact, as virtual reality/augmented reality/mixed reality, or VR/AR/MR, is being adopted for a broad variety of commercial and personal uses.

If you think that VR/AR is solely a toy for gamers, think again. Yes, it’s a booming leisure activity — and it’s also a social and business phenomenon. Health care providers use it for diagnostics; the Pentagon for combat training; real estate agents to show off homes; and automobile makers to build virtual prototypes of new vehicles, to list only a few examples.

With the commercial aviation sector booming around the world, demand for AR smart glasses in the maintenance, repair, and overhaul (MRO) field is skyrocketing. Major MRO players, such as Air France Industries, Monarch Aircraft Engineering, Lufthansa Technik, and AAR, are adopting smart glasses as a way to help their maintenance technicians work faster, more efficiently, and well, smarter. 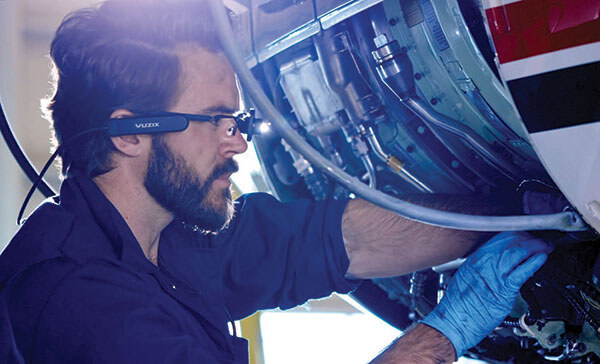 Mechanics wearing smart glasses have access to manuals, checklists, and training videos without stepping away from the aircraft. Photo by Vuzix Photo

The Future Is Now

Strictly speaking, much of the use of this technology in MRO actually represents a form of mixed reality, but many in the industry prefer to use the terms “AR” or “smart glass.”

In a recent white paper, Bank of America/Merrill Lynch Global Research predicts that VR/AR/MR is on track to have 300 million users by the early 2020s, with the potential to capture two-thirds of our leisure time and 50 percent of our leisure spending.

According to the research group Statista, smart AR glasses shipments were 150,000 in 2016. By 2022, that number is forecast to be around 22.8 million units. That’s a 15,200 percent jump in just six years. And that increase is also reflected in sales. Industry consulting firm Digi-Capital forecasts that annual revenue from VR/AR is on track to reach $108 billion by 2021, up from only $3.9 billion in 2016.

Prices for smart AR glasses vary. For business-oriented “enterprise” applications, a pair of AR glasses can cost anywhere from $1,500 to $2,500, depending on the features and functions. If you are thinking of incorporating smart glasses into your business, you should know that they typically need other equipment, such as a tablet or smartphone, to be used to their highest capabilities. 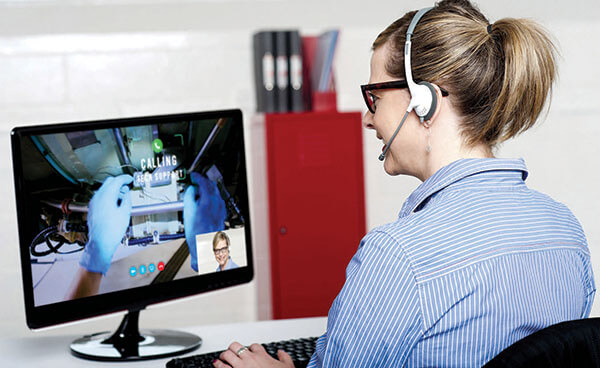 Smart glasses allow a supervisor to see a maintenance problem through the eyes of the mechanic in real time. Photo by Vuzix Photo

Before joining Vuzix, Boris worked at GE Digital, creating “smart factories” for General Electric. That company is a global industrial colossus, so when it comes to disruptive technology — ground-breaking products that shake up an industry or create a completely new one — Boris knows what he’s talking about.

“Our M100 and M300 AR smart glasses are the devices that aviation mechanics, for both fixed-wing airplanes and rotorcraft, increasingly use throughout the enterprise,” Boris said. “AR smart glasses are transforming mechanic training as well as logbook entry. They also allow operators to keep track of inventory and monitor the supply chain.”

With smart glasses, mechanics can input logbook data along with photos and video. This data becomes part of the record, providing additional context and information for supervisors. Seeing is believing, and smart glasses allow maintenance technicians to record what they see.

Smart glasses can do more than just record data. They also provide maintenance technicians with access to manuals and instructions, checklists, and training videos — without stepping a foot away from the aircraft. As hands-free devices, smart glasses enable mechanics to look up details in a manual while simultaneously working on the aircraft.

If a problem suddenly comes up and the mechanic needs help from a supervisor or co-worker right away, the traditional means of conference might be through, say, FaceTime on a smartphone. But that’s not secure and it’s not efficient.

“Now, with smart glasses, the mechanic can conduct this informational exchange with other parties much faster and converse with the data right in front of them,” Boris explained. “The experts they’re conferring with can literally look over the mechanic’s shoulder.”

Mechanics using smart glasses have an advantage when it comes to one of the biggest issues in aviation maintenance: paperwork. “Mechanics are stuck with a huge amount of spreadsheets, binders, and all kinds of paperwork,” says Boris. As an example, he cites aircraft maintenance logbook entries — the conventional way of making them, versus the smart glass way.

“A conventional logbook entry might contain a few cryptic words. But now mechanics can walk directly around and through the aircraft, wearing AR smart glasses, and input the data in real time from the physical location,” he says.

“Data and pictures are logged in simultaneously. Smart glasses allow proven proximity to the matter at hand. It makes for better compliance. These devices feature forward-facing cameras for better, more accurate data. If ever contested, the information is inarguable.”

Not Your Father’s Career

Aviation mechanics are the unsung heroes who keep aircraft and helicopters in the air. And there aren’t enough of them. Aircraft operators and MRO outfits are grappling with this shortage. It threatens safety as well as bottom lines.

Smart glasses are one of the latest solutions to address the shortage. They act as “force multipliers” that can enhance the productivity of individual mechanics.

Contrary to public misperception, aviation maintenance technicians aren’t just wrench turners. The job is complex and high tech; they require sophisticated computer skills and training. But many technical-minded youngsters don’t believe it. When contemplating careers, they listen instead to the siren song of Silicon Valley.

One strategy to recruit young AMTs is to emphasize the exciting technologies now transforming airplane and helicopter work, such as smart glasses.

“A lot of people, especially parents of kids getting ready for college, don’t fully realize that the MRO field is a high-tech profession,” says Richard Aboulafia, vice president of analysis at The Teal Group, an aerospace consultancy. “But being an MRO mechanic is a well-paying, secure, and respected job. There’s more to technology than Facebook. Aircraft operators are starting to market MRO openings as being prestigious.”

Aboulafia confirms that wearable technology is one of the hottest trends in airplane and helicopter maintenance. “More and more mechanics are using smart glasses and a watch, such as the Apple Watch, connected to a tablet,” he says.

“This interconnectivity gives MRO technicians the ability to receive enhanced, step-by-step instructions while out in the field. It makes it easier to multitask. Wearable devices in MRO gives technicians the advantage of viewing data and communicating this data via voice or video displays, all hands-free.”

Training itself has become quite futuristic. AFI KLM E&M designed a virtual learning web-based tool that allows students to study EASA qualifications anywhere and anytime. This tool is enhanced by the use of smart glasses.

New-generation helicopters require mechanics with technological savvy. Consequently, MRO schools are requiring more training in computer science. The importance of keeping current with new technologies is emphasized by AFI KLM E&M Director of Business Development and Sales Ian Bartholemew. “MROs must be a step ahead of the game, be ready to adapt to changes, and have well-structured training plans in place to allow technicians to be able to deal with future aircraft.

“This means having to plan five to 10 years ahead to ensure that we are not caught out by the change in aircraft,” Bartholemew says. “We plan to develop simulation tools and explore other new learning and teaching techniques, ensuring we are fully prepared for the next generation of aircraft and technicians and have the technology to support them.”

Yes, there’s a worldwide shortage of sufficiently trained mechanics. But the industry has the “vision,” so to speak, to meet the challenge head-on.

John Persinos is managing editor of Personal Finance and chief investment strategist of Breakthrough Tech Profits. He is also an analyst at the Teal Group aerospace consultancy. Persinos has received numerous journalistic awards, including the Royal Aeronautical Society’s Aerospace Journalist of the Year Award in 2001 for his work as editor-in-chief of Rotor & Wing magazine. He served as editor-in-chief of Aviation Maintenance magazine and publisher of the website Aviation Today.com, and also attended the Bell Helicopter Training Academy. Contact him at johnpersinos5@gmail.com.