September 2022ROTOR MagazineAdvocating for You

Some Wins for Our Industry

The pre-August recess rush, a US ­congressional tradition, was especially eventful this year. In the United States, we’re getting close to the November midterms, the elections that occur between the four-year cycle of presidential contests, so politicians were eager to return home for the traditional monthlong August recess and tout their legislative accomplishments.

The SAF blenders tax credits, valued at $1.25–$1.75 per gallon depending on percentage of life-cycle greenhouse gas emissions compared with fossil-based jet fuel, will be in place for 2023–2024. Beginning in 2025, the legislation creates three years of a Clean Fuel Production Tax Credit with an enhanced value for SAF of up to $1.75 per gallon. 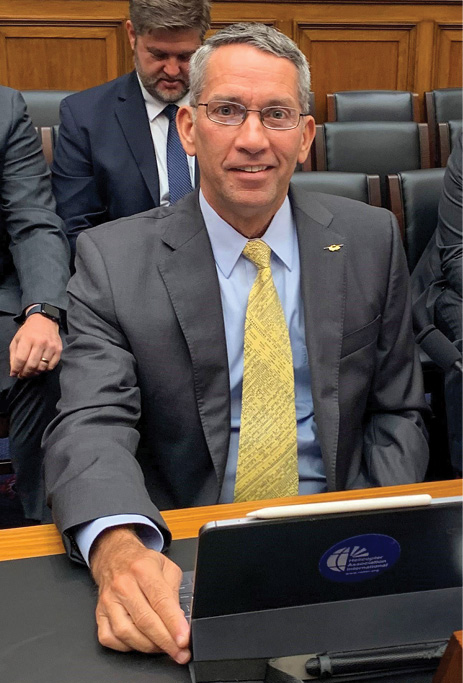 HAI President and CEO James Viola prepares to testify before the US House Subcommittee on Aviation at the Jul. 13 hearing “The State of General Aviation.”

These tax credits will be important tools for increasing the availability of SAF and encouraging its use. HAI, along with other general aviation associations and coalitions, has long advocated for these measures as a critical component in our industry’s effort to reduce CO2 emissions. These credits will help spur increased SAF production, thereby making the alternative fuel more available while reducing its cost to end users.

Federal Funding Still Up in the Air

Federal funding expires on Sep. 30. Neither chamber was able to complete the appropriation process before leaving the District of Columbia for August recess, which left lawmakers with a massive undertaking when they went back in session in early September, after the Labor Day holiday.

As has been common in recent budget cycles, continuing resolutions that provide temporary, short-term funding are likely to keep the government funded while party leaders work to resolve disagreements on the numbers. Given that neither party can afford a government shutdown right before the midterms, there is optimism an agreement can be reached before the deadline.

With Election Day looming on Nov. 8, lawmakers won’t stay in Washington for long before heading back out on the campaign trail. The House is scheduled to have its last day in session on Sep. 30, while the Senate is tentatively set to be in session for two weeks in October, though that could change.

With both the Senate and House majorities on the line in the midterm elections, the passage of the Inflation Reduction Act is an exceptionally well-timed legislative success for Democrats in tough races. The conventional wisdom is that Democrats still face an uphill battle in retaining control, but recent events such as the Supreme Court rulings on guns and abortion are thought to have energized the Democratic base and drastically shifted the landscape.

Members of the House Transportation and Infrastructure Committee are already preparing for the next FAA reauthorization bill; the 2018 legislation will expire in October 2023. To better understand the needs and priorities of the general aviation sector, the House Subcommittee on Aviation held a hearing, titled “The State of General Aviation,” on Jul. 13. The hearing provided an excellent opportunity for HAI to present the committee with the priorities of our membership and to introduce legislative topics to be included in next year’s reauthorization bill.

HAI President and CEO James Viola testified and addressed several issues critical for the vertical lift industry, such as the safe integration of new aviation technology into the airspace, sustainability, workforce development, and much-needed efficiencies within the FAA. (View his entire testimony at https://bit.ly/August2022VFR.) He also described a program recently launched by HAI and partners to address noise complaints in the Washington, D.C., area. (See “HAI, ERHC Debut Washington, D.C., Noise Initiative,” at the end of this article.)

Looking ahead to the final months of this congressional session, the HAI Government Affairs team will continue laying the groundwork for the FAA bill, working with Congress to ensure that our priorities are reflected in the final language.

During the August recess, your legislator was most likely back in their state or district, seeking your support in the upcoming election. That’s why the annual August recess provides an excellent opportunity for HAI members to interact with their elected officials and explain what issues are important to our industry and how their assistance will support small businesses and create jobs for their constituents.

To that end, HAI members involved with the Utah Rotor Pathway Program (URPP)contacted their elected representative, Rep. Burgess Owens (R-Utah-04), to highlight the labor shortage in aviation. They explained how the URPP exemplifies how industry and government can work together to solve a complex problem.

At the end of August, HAI staff and HAI members were invited to participate in the Aviation Workforce Development Round­table in Salt Lake City, Utah, hosted by Owens. Government and industry leaders discussed opportunities to build on the success of the URPP, an HAI initiative that has just received its second national award.

Owens led the discussion on how federal resources for URPP and similar high school and post-secondary programs could help close the skills gap and meet the labor demands of the aviation industry.

Employers and educators provided feedback on the ability to expand the program and how it can be replicated across the country. Cade Clark, HAI VP of government affairs, informed the roundtable of HAI’s ongoing discussions with stakeholders in other states that are eager to set up pathway programs using the URPP model. Clark explained that establishing funding is the biggest barrier to getting the buy-in necessary to launch such programs.

Through the URPP, students are exposed to a pathway to technical careers, while the state benefits by building a skilled workforce. The program serves as a first-in-the-­nation model for education and training programs that prepare high school students for science, technology, engineering, and math careers in rotary-wing aviation. Students can participate in technical classes and hands-on learning at the ­secondary-school level while earning college credits and learning skills specific to rotary-­wing aviation careers.

URPP industry partners work with high schools, flight schools, and universities to offer benefits such as mentoring, internships, and job interviews. The Utah program has expanded to 32 schools in the state and has been awarded a perpetual Strategic Workforce Investment grant by the state legislature.

Farewell to One of the Team

Finally, in a bittersweet farewell, the HAI Government Affairs team said goodbye recently to one of our own. Emma Taylor, a policy analyst and outstanding team member of almost two years, headed off to law school in mid-August. Emma, we wish you the very best and know that you’ll achieve your dreams.

During the Jul. 13 hearing on general aviation, Del. Eleanor Holmes Norton (D-D.C.) asked HAI President and CEO James Viola what steps the FAA and helicopter operators should take to reduce helicopter noise. Norton explained that as a co-chair of the congressional Quiet Skies Caucus, she was “particularly concerned with the effects of helicopter noise on the lives of my constituents here in the District of Columbia.” She went on to say that helicopter noise is a major concern throughout the Washington, D.C., metropolitan area.

Viola expressed HAI’s commitment to work with Norton and her constituents on the issue. He briefed her and other committee members about HAI’s Fly Neighborly program, which focuses on implementing noise mitigation techniques and helping local operators communicate more effectively with their communities.

He also cited the initiative launched in June by HAI and the Eastern Region Helicopter Council (ERHC), in cooperation with the FAA, to collect aircraft noise complaints from D.C.-area residents through an online form, a mobile app, or a noise complaint hotline. After a 60-day trial, the system may be adopted permanently.

Data from the complaint system will be shared with the public and reviewed by industry and government stakeholders to determine where and how improvements can be made. Similar approaches to helicopter noise complaints have been used effectively in other regions to identify specific pain points and appropriately tailored solutions.

HAI supports community compatibility and data-driven efforts to measure and mitigate noise complaints. Operators are encouraged to visit rotor.org/fly-neighborly and take a proactive approach to fostering acceptance of helicopters within their local communities.