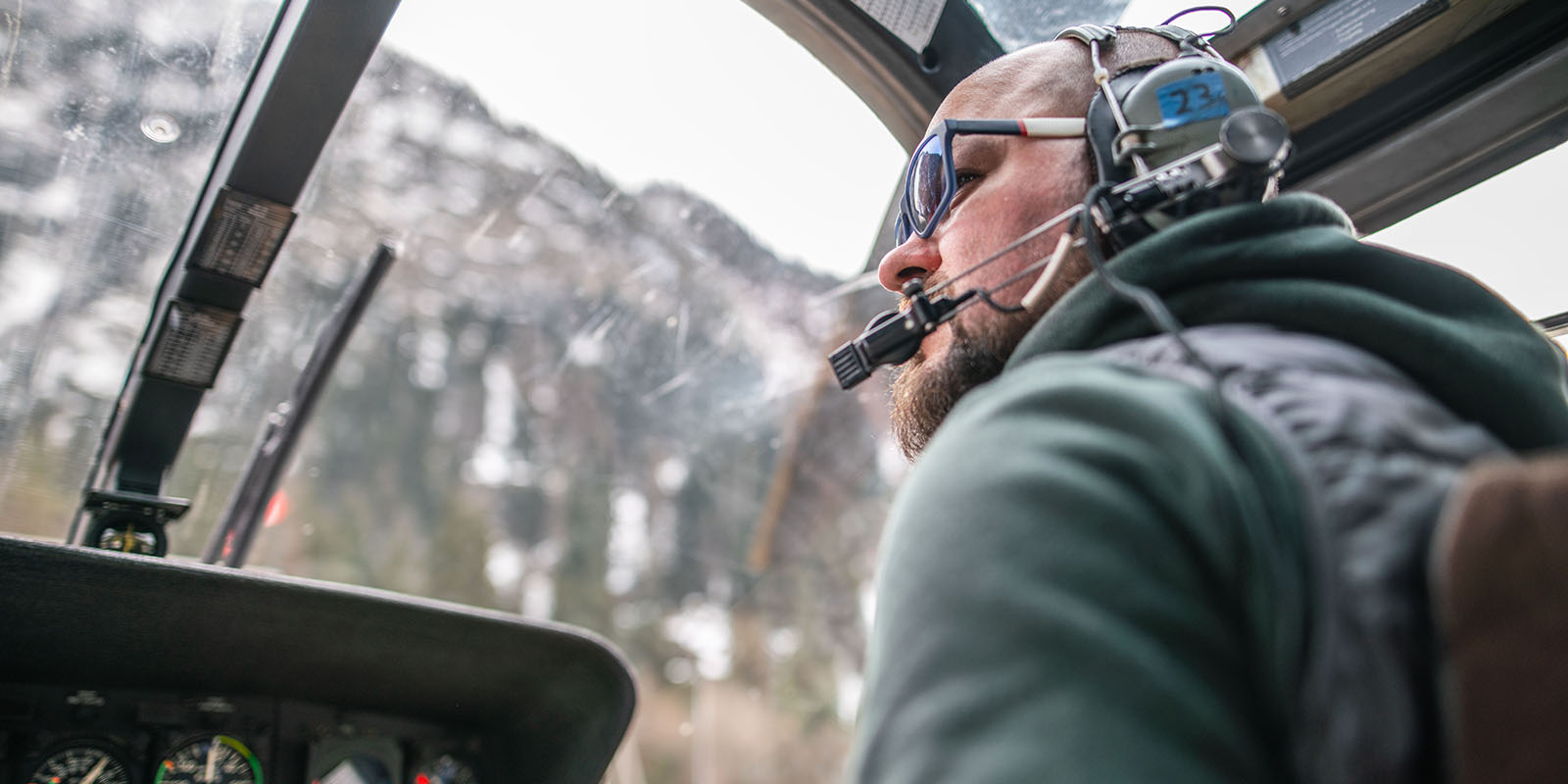 Training for the Emergency

By David Jack KennyJanuary 18, 2022No Comments

Some emergency situations can’t be both realistically and safely simulated in flight. That fact, of course, was a major impetus behind the development of high-fidelity flight simulators, but simulators aren’t available for every make and model of helicopter, and those that do exist aren’t equally accessible to every operator. This poses a quandary as to how to train in the corresponding procedures.

Reviewing checklists or manuals on the ground is of limited utility in preparing for situations that are rare but consequential: A 2007 NASA study of airline crews found that 85% of “textbook” emergencies that matched their training scenarios were handled well, compared with just 7% of unfamiliar situations.

And in helicopters, the ground’s usually a lot closer.

At 8:17 am on Jun. 14, 2018, ZK-ILD, an MD Helicopters MD 600N, lifted off with five on board to conduct an aerial survey of Ngamatea Station, a large sheep and cattle farm on New Zealand’s North Island. About 24 minutes into the flight, while descending through 300 ft., the pilot advised the passengers of an unspecified “problem” with the helicopter. Though they were less than two minutes from their point of departure, he continued straight for around 1,300 m (4,300 ft.) before turning left and attempting to land. 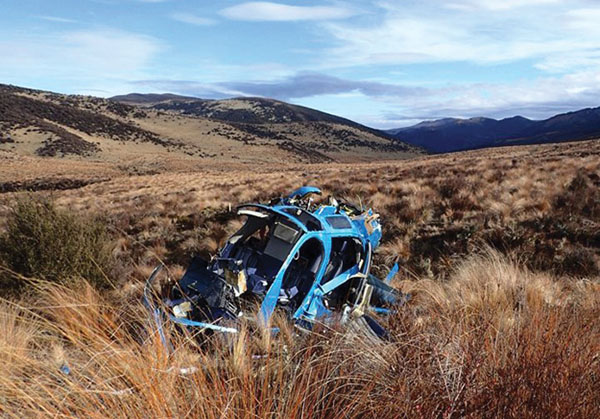 The wrecked fuselage of ZK-ILD at the accident site. (TAIC photo)

The helicopter touched down hard and bounced, rotating 90 degrees, and the main rotor severed the tail boom. The engine surged as the helicopter hit the ground again, setting up a violent vibration that destroyed the airframe and continued until a catastrophic overspeed caused the uncontained failure of the power turbine.

The pilot, front-seat passenger, and rear-seat passenger all suffered severe head injuries. The two middle-seat passengers evacuated the cabin with only minor injuries and used the onboard fire extinguisher to douse flames escaping from the engine’s combustion section.

The emergency locator transmitter was activated and its signal relayed to the Rescue Coordination Centre (RCCNZ) at 8:46. The first rescuers reached the site six minutes later. Four helicopters eventually transported the injured to hospitals. The front-seat passenger, manager of Ngamatea Station, died the following day. The pilot survived but couldn’t be interviewed for two months, then had no memory of the accident flight. The rear-seat passenger, another company pilot not rated for the MD 600N, did recall the flight.

The MD 600N is an eight-seat single-engine helicopter with a fully articulated six-blade main rotor system. It’s powered by a Rolls-Royce 250-C47M turboshaft engine rated for 600 shaft horsepower governed by full-­authority­ digital engine control (FADEC) with manual backup. Anti-torque control is provided by the NOTAR (no tail rotor) system in place of a conventional tail rotor.

ZK-ILD was manufactured in 2000 and imported to New Zealand in March 2018, just three months before the flight in question. At the time, it was one of only two MD 600Ns in the entire country. While this model is normally flown from the left side, some, including ZK-ILD, have been modified to allow single-pilot operation from the right front seat by removing the left cyclic and pedals. Scheduled airframe and engine maintenance were completed on Mar. 29.

The MD 600N’s FADEC system uses a hydromechanical unit (HMU) to provide and meter fuel flow to the engine, adjusted by an electronic control unit (ECU) in response to both internal engine status and flight control inputs. Separate wiring harnesses connect the ECU to the engine and airframe sensors.

In normal operation, the system controls both power output and main rotor speed without need for direct intervention by the pilot. Signals from the ECU to an electric step motor in the HMU adjust fuel flow to meet power demands while maintaining main rotor rpm within normal operating range.

Redundancy against engine shutdown is provided by four distinct operating modes. In full FADEC, the ECU’s primary control channel monitors two separate measures of fuel flow transmitted from the HMU. If they differ by more than a specified threshold, the primary channel flags a “step count failure” and transfers control to a reversionary governor, which compares measurements of the rate of change in engine speed from two different sensors and illuminates three amber lights on the panel warning of degraded FADEC function.

If the difference between those inputs exceeds the specified threshold, the reversionary governor also records a fault and freezes the step motor in its current position, placing the engine in fixed fuel-flow mode. Until the pilot disengages FADEC using the switch on the collective, power output remains constant regardless of flight control inputs. Main rotor rpm will decrease when the collective is raised and increase when it’s lowered. The red “ECU FAIL” warning on the panel and an accompanying audible warning advise the pilot that the FADEC system is now entirely inoperative.

The appropriate response, as detailed in the “Emergency Procedures” section of the Rotorcraft Flight Manual, is for the pilot to attempt to reset the ECU by briefly switching the FADEC control on the collective from AUTO to MANUAL. If it doesn’t reset in two attempts, the pilot is to set it to MANUAL and, using the collective’s twist-grip throttle, reduce power to prevent an overspeed. A separate mechanical linkage connects the twist grip to the HMU’s fuel metering valve, allowing the pilot to modulate engine and rotor rpm until a safe precautionary landing can be made.

The 45-year-old commercial pilot began training for his MD 600N type rating on Apr. 13, 2018. He was the operator’s chief executive and senior pilot, with more than 9,600 hours of helicopter experience, some in models powered by non-FADEC versions of the RR-250 engine. He obtained his type rating after 2.3 hours of dual instruction and another 2.2 supervised by a 7,000-hour Category D instructor with about 250 hours in make and model. By the day of the accident, the pilot had logged 45 hours in ZK-ILD.

Both the pilot and instructor confirmed that they had never practiced using manual throttle control in flight due to the perceived risk of overspeed. Moreover, the instructor recalled having discussed this point during his own type rating training in 2003 with a Category A instructor who’d advised against practicing the ­procedure in the aircraft.

New Zealand’s type rating requirements allow latitude for demonstrating “knowledge” of procedures that can’t be safely demonstrated in the aircraft, but the pilot’s response to the written exam’s question about the “ECU FAIL” warning made no mention of switching to manual mode or using the twist throttle. It was marked incorrect but never revised. The instructor subsequently signed him off as competent in FADEC/ECU emergency procedures on the required Civil Aviation Authority form.

The ECU and HMU were examined by their respective manufacturers. Downloaded data showed that the primary ECU channel shut down 17 minutes into the flight. Eight minutes later, the reversionary governor defaulted to fixed fuel-flow mode. The FADEC switch remained in the AUTO position, and the helicopter touched down 68 seconds later. The ECU had also recorded a “step count failure” on an earlier flight that transferred control to the reversionary governor without being noticed by the pilot. Post-accident testing failed to replicate any of these faults.

While much of the damage might have been avoided had the pilot shut down the engine after the first bounce using the twist grip or fuel-cutoff valve, the Transport Accident Investigation Commission (TAIC) noted that the “severe vibration created by the imbalanced rotor system” likely impeded his response.

The TAIC also noted that none of the occupants wore helmets, likely contributing to the severity of the head injuries sustained. The operator subsequently adopted a formal policy requiring its pilots to wear helmets on all flights, and on May 27, 2021, the TAIC asked the director of civil aviation to “promote education awareness of the benefits of … occupants wearing appropriate helmets when practicable.”

The belief that operating by manual throttle control posed an undue risk of overspeed was apparently prevalent among New Zealand’s relatively small number of MD 600N pilots, as was incomplete understanding of the architecture of the FADEC system. (Two MD 600N pilots interviewed by the TAIC “were unaware of the existence of the reversionary governor.”) They shared a reluctance not just to practice using the twist-grip throttle but even to using it in a true emergency.

The manufacturer advised the TAIC that it has established a procedure for training pilots in the use of the manual mode. However, the company regards the procedure as “proprietary information … not available outside the manufacturer’s own training organization.”

This description doesn’t make clear whether the manufacturer’s procedure is performed in the aircraft or via simulation using specialized equipment. If the latter, this might justify the added expense of factory training, even on another continent. If the former, however, there’s a strong argument that the company’s long-term benefit in fostering effective emergency-procedures training among everyone flying its aircraft would outweigh any loss of training revenue.