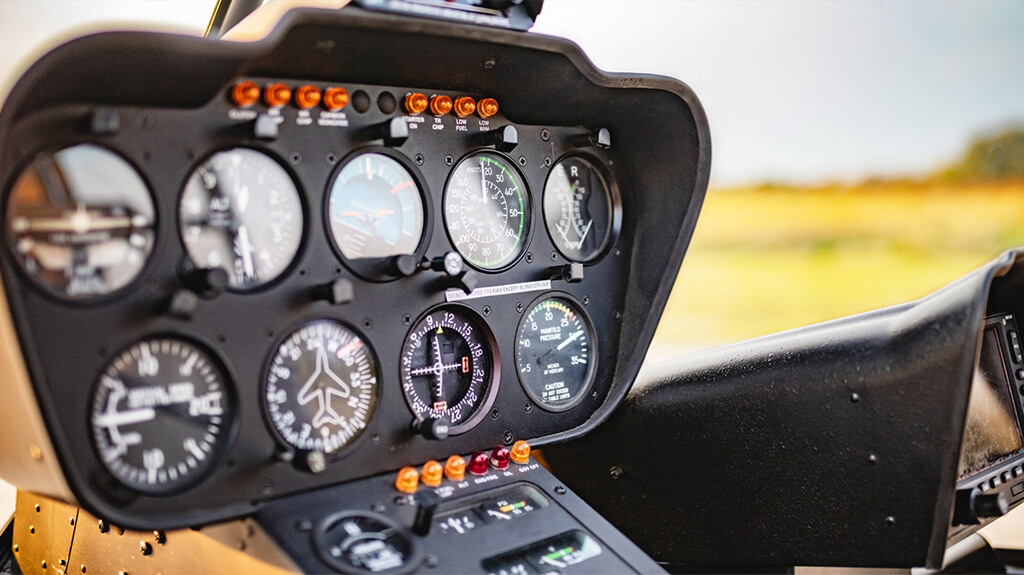 Knowing how your ship works gives you more options when mechanical issues arise.

During my time as a helicopter flight instructor, I stressed to my students the importance of learning, in great detail, the systems of the aircraft they were flying. Pilots who know their aircraft’s systems are better equipped to both detect and troubleshoot mechanical issues.

This belief stems in part from my own training, both flight and A&P, where many of my instructors were seasoned World War II pilots and mechanics—two piloted Boeing B-17s, and another served as a flight engineer on the massive Convair B-36. (If you have a chance, take a look at the flight engineer’s panel in the movie Six Turning, Four Burning to grasp the complexity of the B-36 systems.) My instructors’ knowledge of aircraft systems was extraordinary, and they would regularly share with student pilots and mechanics the importance of knowing all you can about aircraft systems.

Let’s start with the basics. You should be able to answer the following questions about the function and operation of each of the essential systems and components listed in “Light piston helicopters,” below: 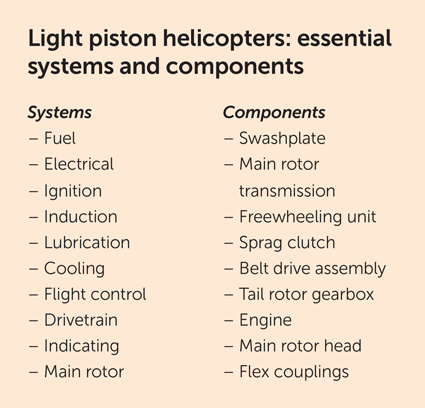 It’s also essential that you know what constitutes normal for your aircraft: how it should look/sound/feel during start-up, flight, and cooldown. Learn the normal gauge indications on the instrument panel. Otherwise, how will you recognize abnormal conditions or readings when they occur?

Training for the What-If …

An invaluable part of my pilot training was covering what-if scenarios: discussions of possible failures or malfunction scenarios of specific aircraft systems and components. This training can prewire the brain so that when something out of the ordinary occurs, the pilot has already thought through the process of managing the event. When things go wrong, every second counts and being able to quickly read the ­situation and apply the correct inputs—all while flight ­conditions are deteriorating and adrenaline is spiking—can save your life.

Some examples of what-if training are:

If you don’t know the answers, I suggest you pursue them and begin your journey to understanding aircraft systems. 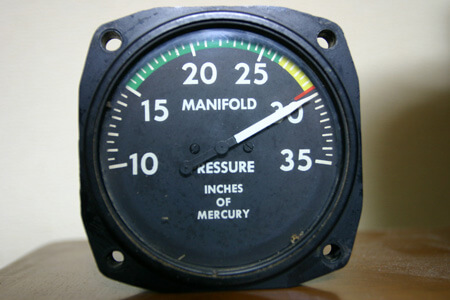 What If … Your MAP Reading Is Higher Than Normal?

Let’s look at another what-if scenario in detail: what does it mean when your manifold pressure gauge has a higher than normal reading after engine start-up?

First, let’s run through the basics. What is the manifold pressure gauge? It displays the manifold absolute pressure (MAP), which is a measure of the absolute pressure of the air–fuel mixture inside the intake manifold. When the engine isn’t running, the MAP should be the same as the ambient air pressure. Once the engine is started, the MAP should read a value less than the ambient air pressure.

The manifold pressure gauge, if working properly, provides pilots with valuable information on engine conditions after the engine is started. In general, a higher than normal manifold pressure indicates a loss in available engine horsepower.

Of course, you also have to know what normal is for your aircraft, so you can tell when the gauge is displaying abnormal readings. What does the manifold pressure gauge usually indicate when the engine is warming up on the helicopter you fly? What’s the normal reading when you’ve reached operating temperature?

Let’s look at an example of how a pilot’s understanding of aircraft systems can prevent an aircraft with mechanical issues from leaving the ground.

After a normal engine start on a Robinson R22 Beta II, the magneto switch will be in the both position. With the rotor fully engaged (clutch light out), the pilot then rolls the throttle up to 75% engine rpm for engine warm-up.

Upon reaching 75% engine rpm, the pilot notices the manifold pressure gauge is indicating 12 inches MAP; the normal reading is usually around 10 inches MAP. Knowing this, the pilot realizes there is something abnormal with the engine, but what?

After the engine warms up, the pilot conducts a magneto check. (NOTE: Do NOT conduct magneto checks in flight in a piston helicopter!) When placing the magneto switch in the L (left mag) position, there is no engine rpm drop. The pilot then places the mag switch back to the both position. This check of the left magneto reveals one of two possibilities:

The pilot now checks the right magneto by placing the magneto switch in the R position. At this point, the engine attempts to quit running, and the pilot quickly moves the mag switch back to the both position to keep the engine going.

Just an FYI, if you’re conducting a magneto check and the rpm drops off quickly with roughness, the cause would most likely be a fouled spark plug. You can address this problem by “leaning the mixture” until whatever buildup accumulated on the spark plug is burned off.

Keep in mind that each cylinder has two spark plugs. One spark plug is fired from the left magneto, and the other spark plug fires from the right magneto for a more efficient fuel burn, while also adding redundant functionality to the engine.

During an ignition event, spark plugs fire simultaneously from each magneto, and the ignited fuel (flame front) begins at the edges of the piston, where the spark plugs are located, and moves toward the center. By the time full cylinder pressure is developed from combustion of the air–fuel mixture, the piston will be on its way down the cylinder on the power stroke.

With the right magneto inoperative or when there is a fouled plug or timing issue, the throttle valve has to be opened more to maintain 75% engine rpm. Opening the throttle increases the manifold pressure.

A piston engine, as well as a turbine engine, is essentially a pump. Both have a low-pressure side and a high-pressure side, and both operate on the principle of ΔP, where high pressure tends to seek low pressure. In order for a normally aspirated reciprocating engine to operate, there must be lower pressure inside the cylinders and higher ambient pressure outside the cylinders.

If a component such as a magneto malfunctions or a spark plug fouls, it will take more throttle opening to maintain a specific engine rpm. A larger throttle opening will result in a higher manifold pressure indication because of the higher atmospheric pressure entering the engine’s induction system.

Some of the reasons for higher manifold pressure gauge indications include:

At this point, if the pilot can’t resolve the issues with the loss of horsepower as indicated by the higher MAP pressure, he or she should shut down the engine, cancel the flight (be able to say NO), note the condition in the flight logbook, and refer the aircraft to maintenance for additional troubleshooting.

This pilot understood the purpose of the manifold pressure gauge and its function in piston engine operations. Because the pilot could identify normal versus abnormal readings of both the MAP gauge and the magneto checks, he or she was able to pinpoint a mechanical issue before takeoff. In addition, this pilot’s logbook entry, with specific references to MAP readings and magneto checks, will be more helpful to the maintenance technicians assigned to diagnose and fix the problem, resulting in more efficient maintenance.

Pilots’ lack of understanding of aircraft systems continues to be a factor in helicopter accidents. Detailed knowledge of how the aircraft works enhances a pilot’s ability to detect a system abnormality prior to flight and to effectively deal with an in-flight system or component malfunction.

I’m guessing that, other than the operation of the brake and gas pedals, many of your friends and family couldn’t explain how their cars work. When something goes wrong, they pull over and call for a tow. Pilots, however, don’t have that luxury. Aviation demands a higher standard of expertise for those who operate aircraft, for the sake of both efficiency and safety.

Bill Hopper holds single-engine land, multi-engine land airplane, commercial helicopter, and CFI pilot ratings and is an A&P with IA privileges. He has a BS in aircraft maintenance management and an MS in aviation safety. Bill is the director of training at Helicopters Inc. in Cahokia, Illinois.