By Rotor MediaJanuary 12, 2022No Comments 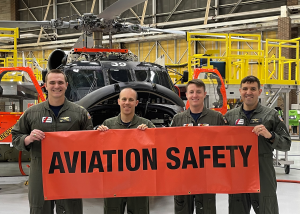 recognizes outstanding contributions to the promotion of helicopter safety and safety awareness. It will be presented Monday, March 7, at HAI HELI-EXPO 2022 in Dallas, Texas.

Initiatives in the safety department at Air Station Cape Cod, the US Coast Guard’s only New England–based aviation unit, have not only increased safety at the air station but have had far-reaching effects across the service branch, as well.

Fostering a strong reporting culture, the air station’s safety department conducts in-depth analyses following unit mishaps. The department’s expertise was leveraged on at least 70 occasions during the past fiscal year alone, capturing lessons learned in the wake of mishaps and making recommendations for both unit- and fleetwide change. In the process, the safety department accounted for more than $390,000 worth of malfunctioning or damaged equipment that ultimately led to a reportable event.

Historically, the department flags potentially catastrophic aircraft malfunctions. For instance, when erroneous radar altimeter readings of 70 to 100 ft. above true altitude were observed while crews were practicing instrument approaches to water at night, the safety department investigated. Upon contacting the USCG Aviation Logistics Center, the department learned that the anomaly was known and occurred around electromagnetic interference (EMI). Though engineering solutions had been implemented to mitigate the effects of EMI, the experience of Cape Cod’s crew proved the hazard had not been entirely eliminated. The safety department also highlighted procedural safeguards for crews published in the MH-60 aircraft flight manual in its analysis of the mishap.

Understanding that this remedy may have been widely overlooked, Air Station Cape Cod’s safety department led an effort to increase awareness about the issue across the entire Coast Guard rotary-wing fleet. This invaluable exchange of information following a near catastrophic mishap is one of many examples in which sharing lessons learned and potential equipment vulnerabilities has sparked training and safety-related discussions within Coast Guard units across the country.

Recognizing the inherent hazards of the aviation environment, the air station also strives to maintain a high state of readiness for any potential mishap with frequent and realistic drills. Air Station Cape Cod maintains a readiness to respond to a mishap through a tiered approach to training that begins with traditional classroom-style presentations, progresses to a tabletop mishap exercise, and culminates in full-scale drills.

The safety department extends its work beyond air operations to include the overall safety of all personnel. When trace amounts of hexavalent chromium were identified in rotary-wing shop spaces, for example, the air station’s safety department rapidly developed a plan to conduct both in-house and contractor-led cleanings to address the concern. Similarly, during lead-abatement efforts on the unit’s aging hangar floor, safety department personnel observed flaws in the contractor’s containment system and issued on-the-spot corrective actions for those conducting the work. These actions prevented lead-dust contamination, which could have posed a significant health hazard for unit personnel.

The air station also uses its wealth of safety knowledge and experience to assist neighboring aviation entities. Through a partnership with Cape Cod Gateway Airport, the air station’s safety department personnel served as both participants and evaluators during a triennial mass-casualty incident drill. The drill brought together regional aviation partners and local first responders to enhance readiness for a potential major mishap.

Through its members’ tenacious drive and commitment to safe practices both on the ground and in the air, the Air Station Cape Cod Safety Department has been an exemplary model of sustained high-safety performance.

The Safety Award will be presented during HAI HELI-EXPO 2022. HAI HELI-EXPO®, the world’s largest helicopter trade show and exhibition, will be held at the Kay Bailey Hutchison Convention Center in Dallas, Texas, March 7–10, with the exhibit hall open March 8–10. For more information on HAI HELI-EXPO 2022, visit heliexpo.com.