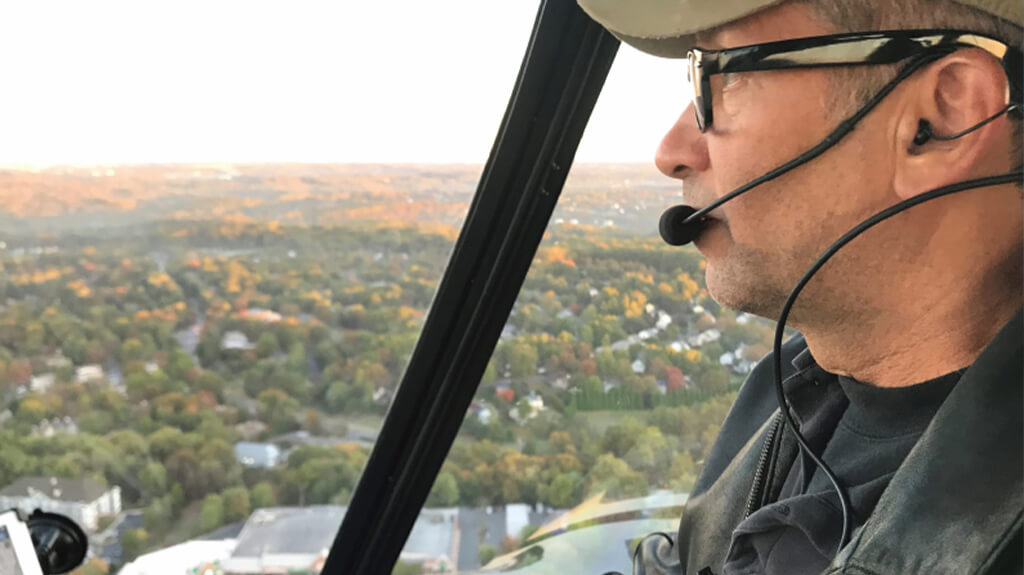 James A. Viola assumed the leadership of HAI on Jan. 16, 2020. As the president and CEO of the association, the seventh since its founding in 1948, Jim is responsible for carrying out the Board of Directors’ vision while overseeing the professional staff and day-to-day operations.

Jim comes to HAI after careers in the US Army, where he first learned to fly, and the FAA. In both organizations, he rose from the ranks to positions of authority. “I like to get things done, to influence things, instead of just sitting back and saying, ‘Well, I wish that hadn’t happened,’ ” says Jim.

US Army and FAA Careers

Jim’s first solo under powered flight may have occurred during army flight training at Fort Rucker, Alabama, but he also remembers fashioning cardboard wings and jumping off his friend’s garage roof as a child. Perhaps that experience also sparked his concern for aviation safety.

Jim grew up in Dunmore, Pennsylvania. After graduation, the high school track star attended college at nearby East Stroudsburg University. While still in school, Jim enlisted in the US Army Reserves, where his experience in basic training encouraged him to enroll in the US Army Reserve Officers’ Training Corps.

Jim was an infantry officer when he saw an ad in the Army Times looking for second lieutenants who wanted to go to flight school. He jumped at the chance. After flight school and assignments in South Korea and with the 82nd Airborne, Jim volunteered for the elite 160th Special Operations Aviation Regiment. In one of many deployments, he was sent to Somalia in 1993 (and later served as the army’s representative on the set of Black Hawk Down, the Hollywood film about the Battle of Mogadishu).

Jim concluded his army career at the rank of colonel with a stint at the Pentagon as the division chief of Army Aviation, Current Operations. Along the way, he picked up three advanced degrees, including a master’s in international relations from Auburn University and a master’s in strategic studies from the US Army War College.

Jim retired from the US Army in 2008, intent on a job in civil aviation. His goal was to set up a flight school, but he couldn’t pass up the opportunity to stay in the federal government and joined the FAA as an aviation safety inspector (ASI). Over the next several years, he rose steadily through the FAA’s Flight Standards Service, which sets, oversees, and enforces certification standards for US airmen and operators. He concluded his FAA service as the director of General Aviation Safety Assurance, responsible for overseeing safety in the US GA community.

In this post, Jim led a staff responsible for more than 2,500 FAA employees with 78 offices around the United States. During his tenure in the job, Jim attempted to address one of the aviation community’s biggest complaints: the perceived lack of standardization in FSDO operations.

“When you come to a FSDO with an issue, you shouldn’t get that FSDO’s answer; you should get the FAA’s answer—which should be explained and enforced in the same way across the country. Where you ask the question or where you apply for the certificate shouldn’t matter,” he says. Jim encouraged the FSDOs to develop shared resources, in part to create operational efficiencies and in part to develop connections between what industry wags call “the individually owned and operated” FSDOs.

In his personal life, Jim is close to his two daughters, Danielle and Shauna, and their families, including his “3.5 grandchildren”— two boys, one girl, and one on the way. He is also an active community volunteer. He is the D.C.–area representative for his university, and he regularly flies for Operation Flying Heroes, an organization that uses an OH-6 and R44 to fly combat-wounded veterans and their families. The mission is to get the service member, whose last helicopter flight was probably a medical evacuation, back in the air and to introduce their young family members to aviation.

A lifelong aviator, Jim holds ATP ratings for both helicopters and airplanes and is a dual-rated CFII. He has more than 6,000 hours of flight time, including 1,100 hours in night-vision goggles, and still flies regularly.

“If I can fly once a week, at least, that’s great. If I haven’t flown in a month, then I’m miserable,” he says.

Jim runs a partnership in a Grumman AG-5B Tiger that he hangars at the Montgomery County Airpark (KGAI) in Gaithersburg, Maryland, near his home in Alexandria, Virginia. “Both of my partners are working on their instrument tickets, so providing instrument instruction to them keeps me sharp. I also fly an R44 out of that airport; the owner lets me fly it whenever I want in exchange for being his safety pilot / flight instructor.”

Ask Jim for his favorite, and he immediately says, “The front seat in the Cobra is a great ride, especially because you got the side stick controls. Unlike most helicopters, where you have the rotor over your head, the Cobra’s front seat is way in front of the aircraft’s center of gravity, so you’re just out there. I love the front seat in a Cobra.”

But Jim can’t stop there. “If you want to ride a motorcycle, then you get the MD 530, five blades and plenty of horsepower. You feel like you can just strap it on your back, and you can get in and out of tight spots. If it’s a really nasty, bad-weather day, then you can get in a Chinook and go IFR high and far, especially with the MH-47’s air-to-air refueling capability, where I could get gas on the go at 110 knots.”

During Jim’s career, he has consistently gravitated to positions of leadership. “I was always very interested in being a teacher. In fact, that’s originally what I thought I’d go to college for. I really enjoy being a flight instructor, which I was certified for as a civilian, not in the military. Being able to have someone walk in with zero knowledge and then seeing them do a solo and  then get a rating—it’s very rewarding.”

Military service also had its teaching moments. “As a military officer, a lot of responsibility for education comes with the job. Being a commander is really about teaching your soldiers and pilots how to do the right things and do them well. Prior to the FAA, I had planned to become a designated pilot examiner, which again is really about the training and certification of pilots and helping that pilot maintain his or her proficiencies.

“But inside the FAA as an ASI I quickly realized that to achieve some of the changes that I thought were necessary, doing it one pilot at a time was not going to work,” Jim says. “So that’s when I decided to focus on moving up in the organization to get to positions that would deliver a wider sphere of influence.

“Working at the Pentagon was challenging, but it was very educational for me to go to the highest level of my organization and see how it operates. I basically did the same thing at the FAA, starting out as an ASI and then working my way back to headquarters. In each case, I then did my best to support the folks in the field, using my knowledge of how both field and headquarters work.”

An individual member of HAI since 2008, Jim intends to use the same approach now that he’s the association’s president and CEO. “What I plan on now is to take my knowledge of working at the highest levels of US aviation and then expanding that to the international level. How can HAI, as an association, best represent the membership around the world and be proactive to where the industry is going?”

In fact, Jim has a few ideas on the future direction of the industry. “First, I think we need to do better with the integration of drone operators. In my view, we want to as soon as possible have unmanned vehicles do all of our dirty, dull, and dangerous work, so we don’t put humans in jeopardy. And because the US aviation rules have been fairly restrictive, there is a lot we can learn from the drone industries in other countries.”

There is also the challenge posed by the rapid changes in aviation. “The world has changed a lot in the last 10 years, and it’s going to change more in the next 10,” says Jim. “General aviation is increasingly incorporating all sorts of aircraft that aren’t strictly helicopters, including drones and autonomous vehicles. I favor an approach where we gather under our umbrella not just helicopters, but all the aircraft that fit our operational profile: everything that operates at low altitudes, is capable of vertical takeoff and landing, and is not restricted to airports.”

Another big issue concerns the attempts to weaken the FAA’s authority over the US airspace. “That would be very bad because that’s one thing that we do so well in the United States and why we have the safest skies in the world. If we had to administer airspace on a state-by-state basis, it would be a nightmare. And that’s why HAI has been such a strong opponent of these proposals for local control of airspace.”

As part of the selection process, Jim presented to the Board of Directors a vision for HAI’s future. They obviously liked what they saw, but Jim says that vision needs to be developed further before it can be turned into a strategic plan for the organization.

“I put this vision together as part of the recruitment process. It was a great exercise for me as a candidate and for the board. Now I need to go back to the staff and members to ensure that this is a vision that is actionable and, most importantly, reflects what the members want and need. To succeed, it has to be a shared vision for the entire organization.”

When asked if he has a specific message for HAI members, Jim says, “I’d really like to know what keeps them up at night. How can HAI help them? That’s our job as an association, to take the weight off of our members. They can concentrate on what they need to do, knowing that we have a handle on the issue and HAI is going to work for them.”

Jim welcomes feedback from the members; feel free to start a conversation by sending your message to him at president@rotor.org.

Gina Kvitkovich joined HAI as the director of ­publications and media in 2011 after decades of honing her skills in writing, editing, and publishing. As editor of ROTOR, she is responsible for every error in the magazine that you are reading—and for some of the good stuff as well. Gina can be reached at letters@rotor.org.